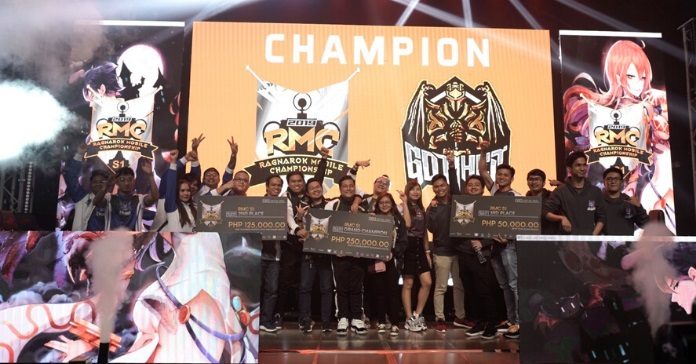 The very first Ragnarok Mobile Championship (RMC) went off with a bang and ended in a huge success in the Philippines despite no support or help from Gravity Co. The home-grown championship was attended by Ragnarok fans, local celebrities, and several guilds in the game.

About the Ragnarok Mobile Championship

It started with several guild leaders from the Philippines namely; Whales, Gottheit, Exodiac and Encore formed “Star Mobs Alliance”. One of the goals is to organize a PVP tournament between members guild to prepare for the War of Emperium update. The result is the tournament, open to all other guilds dubbed Ragnarok Mobile Championship.

Ranniel Araw from the guild Whales reached out to Bren Chong and Dennis Sim, two of the biggest names in the local online gaming world. He presented a proposal that RMC is mainly for the benefit of the Ragnarok community, which in turn was supported by the two.

The goal was to make a regular activity for the players outside the game (Ragnarok Mobile). The RMC is a perfect venue to watch Ragnarok Mobile played live in a competitive scene as well as meet multiple guilds and to have a get-together with their respective guildmates, meet and greet top-performing teams, celebrities, and live streamers. The event also proved that the game has a sizeable number of players compared to other game genres that organize large scale tournaments.

The event had a series of online league matches that lasted for 3 months before the offline events started. The RMC main event is a whole day activity. The Wild Card Tournament started in the morning and a Cosplay Competition after that. The Playoff matches started in the afternoon with the Grand Finals in the evening. In between playoffs and grand finals, the organizers also had a “refine” and “enchant” mini-games for the audience to participate in.

Despite the lack of production staff and minor technical difficulties in between segments, the main event and side events received very positive feedback among the live audience and live stream viewers.

A number of celebrities were in attendance as well including Megan Young and his boyfriend Mikael Daez, Myrtle Sarrosa, and Influencers Shehyee and his girlfriend Anne B. Mateo.

The Future of RMC

The organizers did try to reach out to Gravity several times before and during the online league matches but unfortunately, they didn’t receive any response.

Ranniel and his team are now planning for Season 2. Most of the elements and mechanics will be similar to Season 1 but they will be adding more activities and mini-games for the fans and audience. Side events will be focused on guild activities to encourage more guilds to attend the main event and have something to do on top of watching the tournament.

RMC in other countries in Southeast Asia, namely Thailand and Indonesia are also being planned so expect a bigger annual competition amongst these countries.

Despite the hurdles, RMC Season 1 pulled off a great event. The organizers would highly appreciate all the feedback, suggestions you may want to give. Here’s to another Ragnarok Mobile Championship!