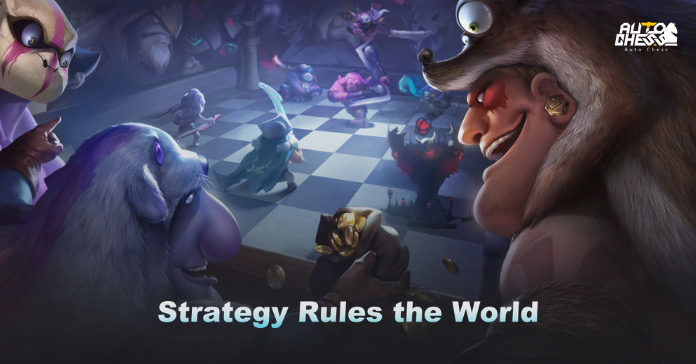 Gold:
There are two sources of gold in the game. The first one is the 5 golds you get every round and the gold you get from your winning streak or losing streak. You get one gold for beating an enemy and will increase to 3 golds if you win continuously. A losing streak will produce gold as well but in the cost of you losing HP from constantly being defeated. You either want to keep winning and hold your position, or keep losing rounds to maximize the gold you get and make a comeback late in the game.

The second method is the gold you generate from interest. For every 10 golds you don’t use, you will get one gold interest (10%). So if you have 20-29 unspent golds, you’ll get two golds interest per round. And if you keep around 50 golds or so, then you’ll generate 5 golds interest per round, which is almost the same as the gold you get on a maximum streak per round. This can play a very huge role late game when you are scrambling to upgrade as many pieces as you can.

Gold management:
Gold management is a very important aspect of the game. It will help you climb up the bracket and secure a position in the top 3. If you were able to make it to the top 3 and are now facing two opponents, it’s better to have 5+ golds stacked than desperately trying to reroll with a mere 10 gold every round.

As a general rule of thumb, always try to maintain your gold in the two digit amount (10, 20, 30, 40, 50) before the end of every round. Remember that you get 10% interest for every 10 gold you don’t spend. This will give you the maximum amount of gold to purchase good pieces.

Another important thing to remember is restraint. Do not rush your level and spend all your gold, or try to reroll again and again just to get one piece. It’s a waste of gold trying to reroll in the early stages since the game is centered around RNG. Balance your gold spending, leveling up, and purchasing pieces.

Melee units:
Tank and warrior units often go to the frontline. Their purpose is to draw aggro from enemies, leaving your other units to dish out damage. Sometimes, you’ll need to put tanks in the back row to counter specific enemy units. More about this in the formation section.

Assassins:
Assassins are generally always put in the back row or at the very edge of the board. This lessens the chance of them getting aggro. Just remember that you’ll need some good tanks to take on the aggro before building up your assassins. Think of them as a glass cannon unit. Heavy damage, yet very fragile.

Ranged units:
Ranged units consist of hunters, mages, healers, etc. They are generally placed in the back row. They dish higher damage compared to melee units. The usual combo will be range units at the very back row and tanks in the front. Check the formation section for a more in-depth explanation.

Straight line:
If your pieces mostly consist of warriors and knights, put them as close to the enemy as possible so that they will engage faster. Having an all-melee team positioned on the second and third row is counterproductive because they would take more time to engage and would have a lower impact. This strategy is also useful for assassin pieces but instead of putting them on the front row, you need to put them on the last row. This way, they would jump right away to the enemy backlines.

Tight corner / box:
If you have ranged damage dealers like hunters and mages in your team, you’ll mostly want to protect them, since they will be your main source of damage. The best approach is luring the enemy army toward you, so put your units as far away from them as possible. Tank units like warriors and knights go in the second row, while damage dealers should be at the first row so that they are the last units the enemy will focus on. Putting squishy damage dealers on the backline but exposed on the outside is a mistake since they’ll be targeted by assassin pieces.

AoE counter:
Check your opponents’ boards and if you notice they are building up more towards pieces that have a lot of AoE skills, then you need to consider making a move to counter it. Moving your pieces and making plans one step ahead of other players is the key to victory. You can spread out your pieces on the board evenly, forcing your opponent to do the same. This way, when an AoE is cast, only a few of your pieces will be affected. A good example is when a pirate king uses his AoE. If your pieces are spread out, only a few units will be stunned. That is already a huge strategic result favoring you. If it’s the other way around and you’re the one doing an AoE team, then make sure your AoE unit is as far away as possible from the skirmish.

Assassin counter:
If your opponent is running an assassin lineup, do not keep your regular positioning of tanks in front and squishy damage dealers in the back. Remember that assassins will jump to the backline so you’ll need some tanks protecting your damage dealers in the back row to counter an assassin high damage output. Check your opponent’s board to see how many assassins they have, and put the appropriate tanks in the back row to protect your ranged damage dealers. That being said, don’t leave your front line entirely defenseless. Keep one or two tanks there to occupy the enemy frontline.

Synergies in Auto Chess Mobile are special passive and active skills that a piece receives if there are a specific number of pieces of the same class or race at play. They are very important and must always be taken into account in planning your strategies and approach.

Generally, class synergies are more important than race synergies. Only pieces of different types are included in the synergy. For example, If we have two tusk champions on the board, they don’t count as two warriors. Some classes are good at the early stages of the round, others excel mid game, and some will become important later on.

Below is a summarized list of synergies you can test out.

And there you have it. We hope this advanced guide helps you gain the upper hand in Auto Chess Mobile. Remember that the game is purely random, so don’t be discouraged if you don’t get the top spot since the main goal here is to get into the top 3. There will also be times that you’ll just be unlucky, but don’t worry about it too much and just have fun! Got a strategy you want to share with us? Let us know below! See you on the board!

“Tower Of Fantasy” Guide: List Of All Relics In The Game