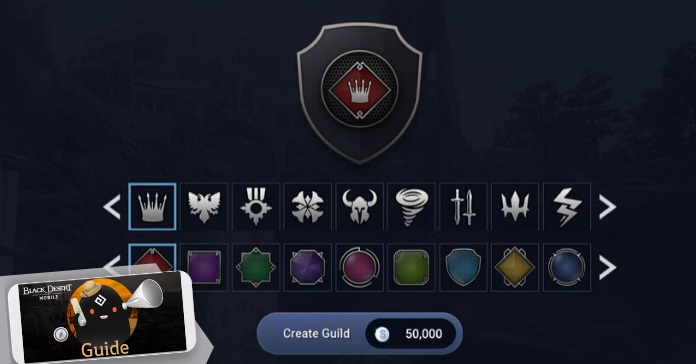 A guild is a staple of all MMO games. They are basically your family, a group of players that has one similar goal. In this guide, we’ll discuss how to create or join one, the basic functions of a guild, and the different functions it provides you.

There are no restrictions for joining a guild; your character will be able to join a guild starting from level 1.

You can use characters and numbers in guild names. Spaces and special characters cannot be used. After choosing a guild mark and name, your guild will be created.

You can check the member list, guild quests, guild rushes, and guild announcements.

The guild master and guild officer can manage the guild by pressing the Guild Manage button. Guild members can press the Leave button to leave the guild. You will be able to earn more social points as more members join the guild and guild activity increases.

Depending on the guild level, the maximum number of joinable guild members will vary.

You will be able to see information about your guild members. You can check their class, job, family name, activity and online status.

By doing guild quests, you can obtain guild points, activity, Guild EXP, and guild funds. You can also obtain social points or silver by completing quests.

Guild points can be exchanged for summoning stone for Guild Rush. Guild quests can be done 3 times a day (Quest resets at 24:00 every day.)

The guild master can summon the bosses using guild points.

Summoning stones can be used for Guild Rush in the Guild Fortress.

Important notes: Guild Rush has 3 difficulties: Easy, Normal and Hard. All guild members can participate in the Guild Rush.

Important note: Call to Battle can only be applied for PVP and Guild Node War.

You can search for other guilds. You can check the guild’s level, who the guild master is, and how many members a guild has.

The guild master can change Join Settings and Guild Focus in the Manage Guild tab.

The guild fortress is where members of a guild can meet and enjoy various content, such as Guild Rush and Node War.

You can check your guild ranking by going through the Main menu > Ranking > Guild Ranking. You can earn rewards based on your guild’s ranking.

Guild members who wish to withdraw from a guild can do so by pressing on the [Withdraw/Leave] button in the guild menu.

Important note: the guild cannot be recovered once it is disbanded.

What is Guild Mileage?

You can obtain Guild Mileage by spending White Pearls or Black Pearls at the shop when you are in a guild.

Once you complete a Guild Quest, you will receive the rewards mentioned in the Guild Quest description.

Join a guild as soon as you can to reap every benefit the features can give you. It’s always fun to play with friends and comrades!