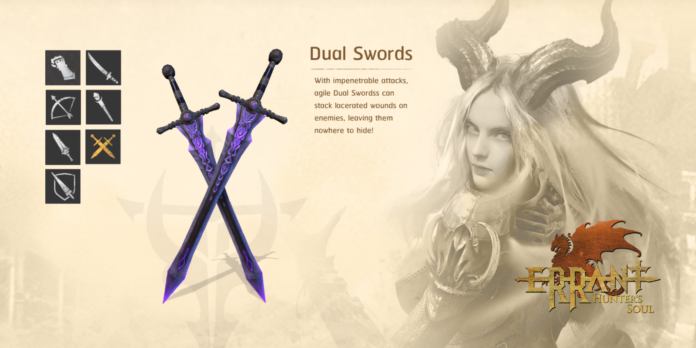 Errant: Hunter’s Soul SEA (also known as Rangers of Oblivion in the NA/EU version) has recently been launched for the Android and iOS platform, and it quickly became a hit among gamers who have been waiting for something resembling the old favorite Monster Hunter for mobile.

Errant: Hunter Soul takes place in a world where monsters called Behemoths have invaded the continent. The surviving humans had no choice but to retreat and seek shelter in cities surrounded by high sturdy walls, protecting them from the horrors and chaos which these Behemoths bring. But not all are satisfied with cowering behind these walls. Humans have fought back, establishing the Rangers, a military force consisting of people with the special ability to wield Hunter Souls: Spiritual beings that have immense power. Together with their fellow rangers and the power of Hunter Souls, they seek to fight back against the Behemoths to reclaim the world once again.

The game offers a multitude of different weapons players can master. In this short guide, we’ll give you a background about each weapon so you’ll be ready to face the Behemoths outside the safety of the walled cities.

“Heavy and powerful, Broadswords can exert explosive power when wielded by skilled warriors. A single charged slash can deliver a devastating blow!”

Massive and intimidating, the broadsword is a two-handed mammoth of a weapon that relies on heavy swings and enhances attacks with an array of close and long range skills for versatility. It compensates its slow attack swings with skills that accumulate power over time that can deal one of the highest damage scales in the game.

The Broadsword is one of the staple weapons for Rangers and is beginner friendly because of its easy-to-learn techniques and good melee range. Learning the right timing to release a charge attack is one of the first things players need to practice when using this weapon. There are two basic types of charge attacks: holding down the attack button will release a tier one charge swing, and the other one is a staple skill that charges until tier three. It can deal massive amounts of damage to a Behemoth when fully charged, making quick work of your enemies.

“War Blade is the perfect melee weapon, combining speed and power. The long range and speed attacks can shred all Behemoths.”

With a long reach and an array of slashing moves, the War Blade is one of the most popular weapons for Rangers. The weapon is very stylish, resembling a long Katana. It boasts good melee range and an array of slash and stab attacks. And just like its inspiration, the War Blade focuses on fluid-like movements and attacks, and with great movability in the battlefield, you’ll be cutting down enemies in no time.

The War Blade has a special gauge called “Morale”. By using normal attacks and skills, the gauge can be filled up to three types of tier: Morale H, Morale R, and Morale C. Higher tier give your attacks a damage boost. Not only that, but by consuming a full bar of Morale, War Blade users can unleash additional attacks that can be triggered by using certain skills. Despite being a long melee weapon, it is not hindered by weight making movement on the battlefield a breeze and utilizing normal attacks a great option when your skills are on cooldown.

“Lift the pike and giant shield. Perfectly integrate attack and defense, and become the strongest guardian knight on the battlefield.”

The pike is a weapon that focuses more on defense. It is used for executing thrusts while the huge shield is used not just for defense but for attacks as well. Unlike other melee weapons, the pike has no problem attacking tall Behemoths thanks to its charge attack that can thrust upward. Additionally, by releasing this charge skill and following it with multiple taps of the attack button, pike users can dish out multiple thrusts upward adding more damage.

The main specialty of the Pike is its defensive capability. Armed with a huge shield, it is used for executing AoE attacks and blocking enemy retaliation. Its special shield counter, a skill that generates a defensive aura, can return enemy damage without the user getting damage in return This makes the Pike a favorite of people who always want to be in the front lines serving as the ranger’s main tanker in parties and absorbing Behemoth attacks that could cripple the team.

Flashy and quick on the draw, Dual Swords can dish out multiple attacks in a matter of seconds. Compared to other melee weapons, the damage of the dual swords is low but it greatly makes up for it with the number of simultaneous attacks it can execute, as well as the ability to target tall Behemoths and skills that lets you deal damage while on the move. And besides, who wouldn’t want to be like Kirito from SAO? Dual sword rangers have very high attack speed and great maneuverability, dishing out waves of slashes then dodging out of trouble when needed.

Their specialty is “Requiem” a skill that leaves marks on their target. These marks stack over time when you target a specific part and when plenty of it has been accumulated it can be “detonated” to deal massive damage.

“With shocking explosive power, giant gauntlets are the first choice for hot-blooded fighters. Their powerful blows will make the enemy shudder.”

Gauntlet users can be compared to martial artists choosing to fight Behemoths head-on with their fists. It can do multiple chain combos from a flurry of punches. With short skill cooldowns, gauntlet users can make quick work of their enemies. No tactics or strategies, just some good old fashioned, toe to toe brawl.

Their specialty skill lets them create “illusions” or clones of themselves that can be used to further the damage they inflict on a target. Gauntlets also have a morale system like the War Blade, but less complicated. High morale gives additional clones when you use skills that utilize them.

It is one of the weapons that beginners can pick up easily. With explosive power, chain combos, and good maneuverability, the Gauntlet is formidable despite its short range.

“Combining strength and agility, Long Bows can hit targets accurately from a distance. They’re the most reliable snipers on the battlefield!”

The Long Bow is one of two range weapons currently available in the game. The main allure of the Bow is its ability to deal damage from a distance with high crit rate and the accuracy to target specific Behemoth parts, making it easier to break them which helps a lot when you need a specific material for crafting gears later on.

Longbow users should be aware of the effective range of their weapon. A red target mark means you are positioned in the most optimal range, dealing max damage and crit to your target. A yellow mark means you’re outside the effective range and will lessen the damage you dish out. Stray too far and you’ll be out of range. Long Bows have a charge attack that will release three homing arrows to a target. Unlike other weapons, players can still move will doing normal and charge attacks, allowing Bow users to position themselves effectively in the battlefield, whether it’s staying away from the enemy’s reach or to get a better angle on a target.

Staff is the second range weapon available in the game. It wields arcane magic focusing more on casting spells that can inflict high magical damage to defeat Behemoths. It is the only weapon that has elemental damage in its skill set (other weapons need to rely on crafting) making them very versatile in exploiting a Behemoth’s elemental weaknesses.

They have a special skill of arcane missiles that can home in on a target regardless of the Ranger’s position. This can be activated by filling in a special gauge through casting spells and attacking. Just like the Long Bow, Staffs can also target specific parts making it a favorite for Material gathering and confronting Behemoths with high stats.

Choosing this weapon needs a lot of patience and practice as staff users need to always have good positioning during battles for them to have enough time to cast skills and avoid enemy damage.

And there you have it. We hope that this guide can help you choose your weapon in Errant: Hunter Soul. Remember, there is no “best” weapon and every one of them has their advantages and disadvantages. It’s up to you to show how awesome they can be, so start practicing today! For more game guides, always tune in here at Enduins! Cheers!