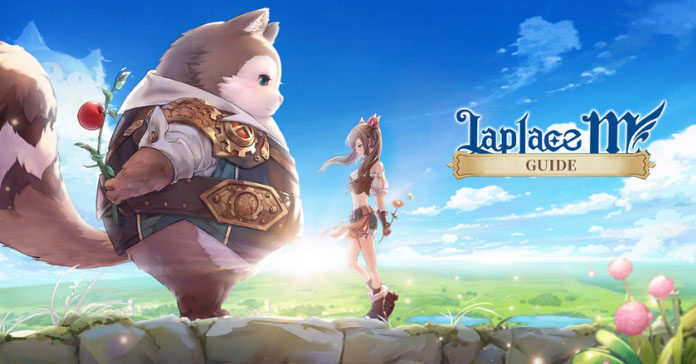 Laplace M is finally here! The highly anticipated mobile MMO from Zlong Games has already attracted thousands of players in just day one of the game launch. With a new platform and a bunch of instances, events, features, and game modes to understand, it can be a bit overwhelming and confusing to new players. Worry not though as Enduins has made a Laplace M Basic Beginners guide to help you get started in no time!

In Laplace M, there are four base character classes to choose from. Each base class can advance between two advanced classes, each one very different from the other in terms of focus on specific traits.

The warrior is your basic melee class in the game. They have high damage and defense making them a good all-around character. They can advance to Paladin or Berserker.

Paladin is the tank class in the game boasting high defense. Their main equipment is their steadfast shield that can block attacks and can also be used as a weapon to bash enemies to the ground.

Berserkers focus more on raw damage and getting into the center of the ensuing fight. They have life steal capabilities that can sustain them in battle. They still have good damage but not as high as the Paladin.

Mages focus more on the arcane arts and the elemental manipulation of fire and ice, dealing damage from a safe distance. They can advance to a Pyromancer or a Frostweaver.

Pyromancer focuses on the element of fire. Dealing huge amounts of damage, they blast their devastating flames through a magically infused rifle and continually cause burns to their unfortunate targets.

Frost Weavers specialize on the element of ice. Like the Pyromancer, they can also deal huge amounts of damage but they excel more on crowd control, making it difficult for their enemies to execute their next move and give allies support at the same time.

The cleric is the support class in the game, focusing more on assisting allies and healing them. They are a vital member of any party in any given situation. They can advance to a Priest or a Ranger.

The priest focuses more on supporting their teammates. They share their faith to those in need and have a higher level of healing capabilities than their counterpart, the ranger.

Rangers are a hybrid class. Steering away from the generic long range classes in MMOs, they can switch from being a damage dealer into a support role that can heal teammates, but not as potent as the Priest. They can also debuff enemies with curses.

Stealthy and nimble, Assassins would rather attack from the shadows, striking when you least expect and dodging out of sight right after. They focus on precise attacks and excel in indirect melee combat. They can advance to a Ninja or an Asura.

Ninjas have mastered the Assassin’s way of stealth and have become one with the shadows. They have crowd control skills that put enemies in disarray and they can summon jutsus and  friends to aid them in battle.

Asuras have not forgotten their assassin heritage, but rather than attacking from the shadows, they now strike head-on with confidence. They have devastating critical blows and crowd control skills to pair it with. Enemies fall before they’re even able to counter.

When your character levels up, they will gain a skill point, which you can use to increase your skill. Higher level skills in the skill tree can be unlocked after unlocking other prerequisite skills, while other skills will only be available at certain levels. There are also specific skills that can only be used for PvP or PvE.

You can also gain unique skills from cards you obtain in the Card Dungeon. Embedding them in a gear allows the player to use the card’s skill and receive bonus stats. Leveling up your cards further increases the skill stats and cards can be freely swapped any time. You can upgrade a card by choosing one then tapping the “enhance” button, but you will need mana and silver to do this. Dismantle extra Cards to regain the mana and use it for other cards.

Guardians are the loyal companions in Laplace. They’re basically like pets that support players and can be acquired in the Guardian Island using a net. Each Guardian has its own special Active Skill, a randomized personality, and an inherent Passive Skill. Improving the intimacy between player and Guardian can give the Guardians a chance to unlock new skills. Higher tier Guardians can learn more powerful skills and have a higher probability of learning an advanced skill. If a player’s guardian doesn’t fit their playstyle or class, they can use a Lotus Fruit to reroll a Guardian’s personality and inherent skill.

Your equipment can be viewed in the bag icon where you can also swap gears or enhance, and dismantle them. You can acquire better equipment in the equipment dungeon. Gear enhancement can be unlocked at level 20 and you will need Star Diamonds and Silver. Gear rarity starts from green to blue, purple and then yellow.

Your character stats are located at the avatar icon on the upper left of the screen. There are different stats that affect your character.

Leveling in Laplace M is quite easy, you just need to follow the main storyline in the game. It does have an auto system, but if your hands on with Laplace, you can play side quests that your character might stumble upon. There will be level intervals that will stop the main storyline from progressing because of the fixed level limit at level 29, 34, 38, 42, 45, 48, and 50. This is the time you can participate in Kingdom Modes where you can gain a lot of XP and items.

Laplace M has a level cap. This prevents people from playing all day long and dissuade the use of grind bots. This also helps newbie players to catch up to higher level players, so there’s no reason to rush things as the level cap gives a fair play usage. There are a number of factors that revolve around the level cap. For example, the level cap depends on how long the server has been open. This means as the server ages, the higher the level cap will be. But what if you reached the level cap? What’s the point of doing all the quests and Kingdom Modes? Well when a new level cap unlocks, the XP you accumulated during the previous level cap will pass on making it a sort of XP investment until the new cap unlocks. Furthermore, if your character is 6 or 3 levels lower than the current server level cap, you’ll receive bonus.

To-dos to get stronger

Laplace M may have a few flaws but it has a good system which can have a great deal of appeal for all kinds of players. With its cute and anime-ish design, it’s attracting gamers by the day with its undeniable charm. The level cap system is a welcome innovation for fair play usage as well. The game had a rocky start, but it has since gained its footing and continues to grow in the mobile arena, and we hope that this little guide has given you the boost you need! Be sure to come back here regularly, as we will be updating this guide with more tips and tricks!