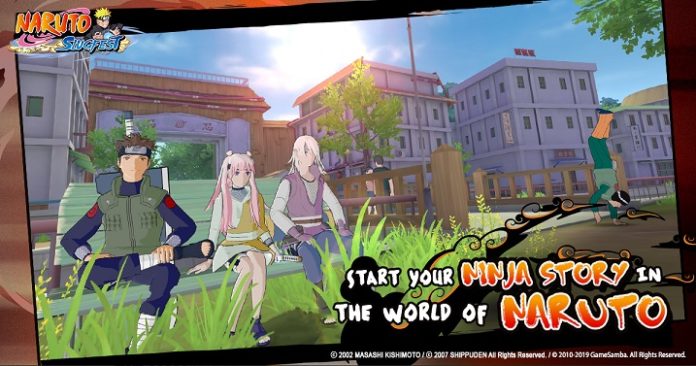 Naruto: Slugfest’s Open Beta is now live and hot! The world’s First Naruto-based 3D open world mobile MMORPG has fans of the franchise already under their genjutsu! And we’re no exception!

In this guide, we’ll be looking at the basic functions, features, character classes, and vital information that will help you on your road to becoming a legendary ninja! Remember that all great Shinobi started by mastering the basics!

The game’s plot starts in the Naruto Shippuden timeline where Naruto comes back to the Konoha Village after a two-year-long training with one of the legendary Sannin, Jiraiya. At the same time, the Five Shinobi Nations are now facing the biggest threat as the terrorist ninja group, Akatsuki starts to become more active. Also, Naruto must deal with the loss of someone he considers a brother, Sasuke, who joins Orochimaru in exchange for power in order to have his revenge on his older brother, Itachi.​ Now on to the guide!

Currently, there are 4 different classes you can choose in the game. Each of them has their own set of skills, playstyle, and purpose or more commonly known as character role.

They can switch to assault/potent or defense type. A front line shinobi. They can deal huge amounts of melee damage and have high defense making them the de facto tankers in the game. They mainly focus on crowd control and AoE attacks. Their special traits are receiving bonus shields and some lifesteal attacks for added survivability. Earth Keepers can definitely outlast anyone on the battlefield and is a vital member of any team.

They can switch to a range or agility/tactical type. Wind shooters prefer to attack from a safe distance, they can deal huge amounts of continuous damage to a target and disrupting enemy formations. Agility types, on the other hand, prefer hit and run tactics with their utility skills that can get them out of trouble and go back dishing out range damage. They also have a special trait that can further increase their range of attack and damage output when they using range type weapons making them deadlier than ever.

They can switch to pyro or medical. This class can manipulate their life forces, sacrificing their own HP to deal great amounts of damage but at the same time, they can also give life back with their healing and skills, healing and buffing your team. Their special trait can either add additional damage to their targets by means of inflicting burns or increase their movement speed and become more resilient to crowd control effects. Blazing Lotus ninjas are the lifeline of any team. If you wish to survive longer or survive at all, always have a Lotus in your team.

They can switch to mobile or stealth style. Thunder Assassins excel in close-quarter combat but can also deal mid-range damage if the situation calls for it. They prefer to do hit and run tactics, dealing serious amounts of damage and then backing off and hiding until the next opportunity for a strike arrives. They can move behind enemies and strike them all the while defending themselves with damage absorb skills. They have a special trait of raising their critical rate and can deal more damage if they attack from behind.

By pressing your character icon at the upper left of the screen, you can open the character menu. Here you can check your character’s total combat power, stats, titles you’ve unlocked, achievements you can finish, and a shortcut to your inventory. You can also set up your potion consumption to what degree. Potions are automatically consumed once it hits your set threshold.

Naruto: Slugfest gives you three options on how you want to view your environment. Camera angles don’t affect any features in the game nor does it have its pros and cons. It’s more of a player’s personal taste.

Questing will take the majority of your time to start off. Thankfully it’s not that complicated since almost everything is automated. You can check your main quests and side quests in the task menu located on the left side of the screen. Simply tap the mission and then your character will auto-path to the mission area. Auto-combat will be unlocked later on so starting off you’re gonna punch those buttons and get a feel for the different skill combos and sets you wanna stick with. There’s also a bunch of mini instant challenges peppered throughout the quests where you’ll need to apply some skills and know-how to finish like balancing your chakra to climb up a tree and so on.

The forge menu is where you can take care of your gears. The enhancement menu levels up your gear. The Magatama is to other games, the gems that you imbed in a gear to give it additional stat boosts. Enchant menu lets you further increase your gear’s strength, and the Fuse menu lets you combine 2 gears of the same tier to receive new gears with a higher tier. Pretty simple stuff that you haven’t seen before in a mobile RPG. If you played one game with the same type of gear feature and mechanics, you’ve seen them all.

You can summon your favorite Naruto characters in the game to aid you in battle and become your partner throughout your journey in the shinobi world. To do this, you need to go to the partner menu and summon one by using ramen vouchers. If you’re lucky, you’ll be able to summon a random character. If not, you’ll get shards. These shards can be accumulated and when you have enough, you can combine them to summon a partner. Free summons can be used daily.

You can also customize your partner by leveling them up. Cultivating your partner puts them into training mode where they can grow stronger, and the codex is where you can check the available characters you can possibly recruit. Partner rank starts with rank B, A, S, and finally SS. SS rank being the strongest and rarest partner you can recruit.

Other menus include the character’s background story, the gallery where you can check out artwork and images, and the album to check out which ones you already have.

Using your partner is fairly simple. Just tick the check mark located in their character icon to equip them. You can equip up to 2 partners. They can be used as skills. In combat just tap their icons located beside your skill icons and they’ll be summoned to your side which then they’ll do their special move to attack your enemies.

Each class has a diverse set of skills. They are categorized into 3 types. Each class has different movesets but all of them have 4 sets to customize, so basically you can freely choose from the 4 sets and see what suits your playstyle best. Tapping a skill icon will bring up the information about that particular skill and its effects, located on the right side of the screen. You can level up your skills by spending skill points. Skill points can be earned in a number of ways, the easiest is leveling up or spending money to buy more skill points. The second set of skills can be unlocked at level 30 and ultimate skills at level 11.

We hope that this guide will help you start off in the right direction in Naruto: Slugfest. Although we only covered the basic information about the game, remember that all legendary shinobi started off mastering the basics, just like what you are doing now. We hope this will give you an edge and get a head start! See you in Konoha!