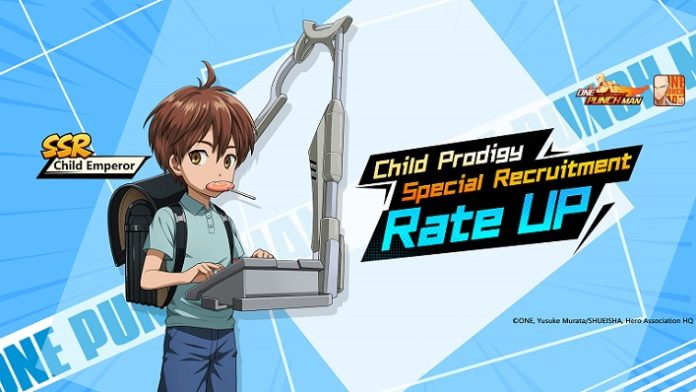 As the pick-up event for the character of Child Emperor in ONE PUNCH MAN: The Strongest begins today, July 16, more and more players have been successfully recruiting him! And who wouldn’t? Being a genius child who loves lollipop, Child Emperor has achieved great feats as amazing as other heroes in the anime. He is even known as  the golden supporter in “one round style”!

If you’re one of those who got this Child Prodigy, here’s a handy guide so you can maximize his power and techniques!

Attacks enemies in a row. This skill recreates his backpack weapon attack from the anime. A Crit hit will [Shatter] enemies. This grants him great versatility so that he could adapt in most combat styles.

There’s also a 50% chance of [Stun], which will give you advantages during battle.

His passive skill “Child Prodigy” will grant the [Berserk] state to allies in the same row after the action. In this state, Child Emperor’s speed cannot be outmatched. He is an amazing supporter in boosting your allies’ damage!

The [Basic Effect] of his Core Skill Prodigy Power allows your allies to almost instantly recover lots of Energy which would allow them to deal a huge amount of damage within the first round. This works well in PVE instances, Institute of Genetics, and has the seal of approval from top PVP players.

The [Advanced Effect] will further boost the attack of the whole team. If we say the Basic Effect is necessary, the Advanced Effect will be the finishing touch.

1) [Monk] Set for the supporter

Try to use the Monk Set whenever possible. Main stats: ATK. Secondary stats: 3 pieces of SPD, 1 piece of CRIT, or 4 pieces of SPD. Inflict [Shatter] at the beginning. If you can [Stun] a target, then you are a step forward towards victory.

These 2 sets will grant quite a substantial damage boost. Main stats: ATK. Secondary stats: 3 pieces of SPD, 1 piece of CRIT, or 4 pieces of SPD.

To maximize Child Emperor’s power, our first recommendation is the “one round style”.

Speed 1 Child Emperor, Speed 2 Atomic Samurai, Speed 3 Golden Ball. You need to keep the speed of all your characters above 200. Try your best to defeat the main target within one round. This is one of the best examples that Child Emperor is the golden key supporter in “one round style”.

So that’s it, you now have a full background on how to use Child Emperor! Remember, the special recruitment for Child Emperor starts today, July 16! Go ahead and pick him up! Also, stay tuned for more surprises and announcements from ONE PUNCH MAN: The Strongest. Good luck, warrior!