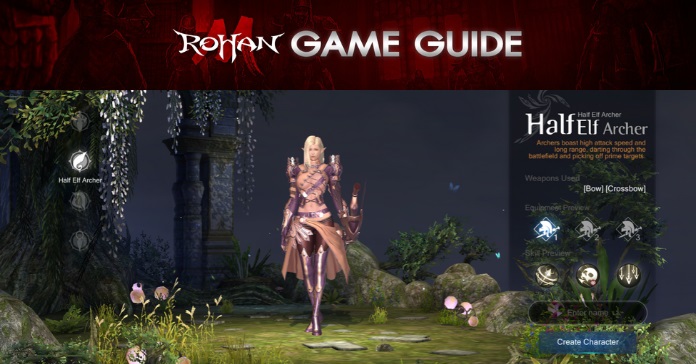 One of the most anticipated MMORPG – Rohan M – is finally here!  For those not familiar this is the mobile adaptation of the classic PC MMO Rohan Online. While the game may feel very familiar for veteran RPG players, there are those who are actually playing this type of game for the very first time. And for those people, Enduins has got your back! Dive in our Rohan M Beginner’s Guide to know all about this awesome MMORPG!

Knights boast high vitality and defense. They excel in close-quarter combat. Their preferred gears are sword, shield, and dagger.

Archers have high attack speed and long-range. They can maneuver through the battlefield and eliminate specific targets one by one. Their preferred weapons are bows and crossbows.

Mages wield a number of offensive spells and debuffs. They excel in large scale battles eliminating multiple enemies at once with their AoE skills and high damage output. Their weapons of choice are wands and staff.

Assassins excel at sneaking through the enemy lines and picking off prime targets or distracting enemies with a debuff and stealth skills. They mainly use daggers and katars.

Just like any mobile-centric RPG, the lower left side of your screen is where your D-pad is located. Holding the joystick and then dragging it in any direction will make your character move.

On the upper right side of your screen is the quest list. This is where you need to check what’s the next goal and what to do next. This will be your most-used button in the game. Since Rohan M implements an auto-quest feature, everything will be automated for you when you’re out in the field. The quest list button is the only thing you need to have manual input for and that is broken down into two choices: to accept or finish a quest.

Tapping the quest list will automatically move your character to the quest location. If it is a kill quest, that will also be automated.

There’s also a handy instant teleport button to quickly go to the quest location. Teleporting to a quest area will cost you gold depending on how far the area is from your current location.

At the upper right of your screen, you’ll see a bag icon. This is your inventory. Everything you loot will be dumped into your inventory including new gear, consumables, and materials. To open it, simply tap the bag icon.

To equip a gear, tap the item you wish to equip. Once tapped, the gear information, stats, and bonus effects will pop up, giving you an insight if the equipment suits your current character build and play style. If the gear you chose in the inventory is the same as your current equipped one, both stats will pop up giving you the chance to compare the two and decide which one is better.

Once you have decided, simply tap the gear again to finally equip it.

On the lower right side of your screen is where your attack, auto-attack, and skill buttons are located, as well as the shortcut keys for your HP and mana potions.

The HP and mana potions are automatically consumed once their bars reach a certain point.

By tapping the basic attack button, your character will automatically go for the nearest target and attack. Your skills are automatically used once in combat. You can always toggle off the auto use of skills if you wish to by tapping the skill icon.

Most quests in the game require you to either kill a certain number of enemies or do some tasks from different types of quests.

World map and how to navigate areas

To navigate the world of Rohan, you’ll need to open the minimap first located at the upper right side of the screen.

Once opened, a list of areas will be shown to you. Most of the areas listed here will be accessible to you once you progress more in the game.

To teleport to an area, simply tap which place you want to go on the list.

Some areas have multiple portals. If your chosen area has two or more, you can choose which one to teleport to on the right side of the screen below the zone area information.

Once decided, tap the move button located down below the list and you’ll be teleported to that area.

At the upper left of the screen, you’ll see your HP and mana bar. You can tap this to open a sub-menu where you can preview your character’s current equipment and the stat information tab where you can allocate your bonus stat points.

When you level up, you are given four bonus stat points. In order to allocate these points, tap champion info and then go to stats info.

Here, you will see the different stats you can strengthen with the bonus stat points. They are:

Once you have chosen which stats to add on, tap “Apply” to finalize the allocation. If you don’t know which stats suit your class better, tap the recommend button to check which stats will benefit you the most.

In the skill menu, you can check the list of available active and passive skills of your class. This is also the menu where you can increase their level.

Active skills have level limits. All skills can be obtained via leveling up. When you select a skill, a menu will pop up with its details such as skill effects and cooldown.

Passive skills, on the other hand, can be selectively leveled up according to your job class.

Pets are considered one of the most important things in the game because each pet will have skills that will make a player’s experience in the battle easier. Additionally, there are some pets that have skills that allow you to enter special dungeons. Players can deploy three pets at the same time.

In Rohan M, you can collect various costumes that you can use on your character. Costumes will give bonus stats and also change your appearance.

In the costume menu, you can check the ones you already have and check their different details and the effects they will give you once equipped.

You can combine costumes as well. By combining two costumes of the same grade, you’ll create a new random costume. The Costumes/Crests you’ll use must be of the same rarity. Additionally, there is a small possibility of getting a higher grade. This is useful when you have extra copies of a certain costume and you are trying to collect a certain set.

You can also change your Combine Result by using Ruby. A maximum of three random chances are available and they cost 900 Rubies, 2,900 Rubies, 4,900 Rubies, 6,900 Rubies and 9,900 Rubies respectively.

Every character you make in Rohan M can develop various stats by growing five types of runes. All the characters you created on the same server will share the growth status of all five runes.

You will need rune essence to upgrade your runes. Each rune requires a different kind of essence.

Additionally, you will need the essence of mana for evolving runes. Runes can be evolved to the next tier once they reach +7.

You can craft various items using various materials in the game.

First, select the item you wish to craft by selecting a category. This will open a subcategory menu with the list of craftable items.

You can see the list of materials you will need on the right side of the screen once you choose an item you wish to craft. If you have enough materials, pay the crafting price seen below and select the craft button.

How to upgrade items

In Rohan M, the PvP and the vengeance system are integrated into one. The hit list is the exclusive function where you can check your PVP records, current battle statistics, and use the revenge function. This is also the menu where you can see this season’s top 100 players.

PVP ranking is seasonal. When the season resets and you’re among the top 100, you’ll receive rewards.

When you lose in a PVP match, you can use the revenge system and teleport to where the person who defeated you currently is. You can then proceed to hunt them down and exact your revenge.

The dungeons are single-player content. You can challenge a variety of instance dungeons with varying difficulties. By entering, you can measure your character’s strength and receive rewards for it.

To challenge a dungeon, select it from the list and then choose the dungeon difficulty. Tap “begin the challenge” to start.

The Black Market is a place where players can collect various materials and equipment, free of charge. You can also receive different benefits for free as well.

There you have it! Remember, this guide covers the basics and the important features about Rohan M that you’ll need to know to point you in the right direction. But once you master them, you can create all sorts of strategies to win! We’ll see you in Rohan M!