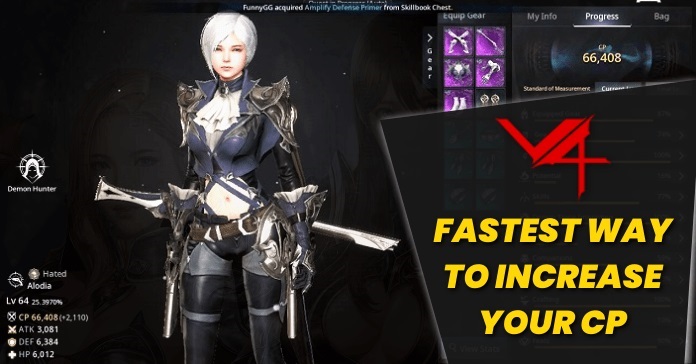 The official launch for the global version of V4 (Victory 4), Nexon’s flagship mobile MMORPG is fast approaching. The game has a crap ton of features to learn, but luckily, a bunch of these we’ve already encountered before from other mobile MMOs including the ever so coveted Combat Power or CP. In this guide, we’ll list down the basic features that can increase your CP and make you a more powerful player. Do take note that these are the basics that you can easily learn from day one, so we won’t be diving too deep. Let’s start!

Combat Power and how it affects you

We have already seen Combat Power (CP) in many mobile games by now and how it is utilized. V4 is just the same. It is basically a gauge on how powerful your character is with the sum of all the bonus stats your gear, character level, enhancements, skill level and so on you currently have. Combat Power helps you in a lot of ways, more commonly it’s used to check if you’re strong enough for certain tasks like taking down monsters and bosses, if you’re well equipped to enter instances, a new area,  dungeon runs, and so on.

This is a no brainer. Equipping gears will, of course, increase your CP. The higher the tier, the higher the upgrade and enhancement a gear has, the higher the CP it will put out. They are your main source for increasing your stats and progressing through the world of V4, especially during times of combat. Gears will be your bread and butter in the game, not only as something you use, but also something you’ll need to collect. Do not neglect your gear and try to gain better ones since V4 is a PVP oriented MMO. The better the gear, the better the chance of survival.

We’ve seen this feature before in a few mobile MMO titles including Lineage 2 Revolution where you can collect different types of gears and put it in a sort of Codex. Here you can gain additional stats including attack, defense, crit rate, and so on. Increasing your stats will, in turn, increase your CP. There’s a ton of items and gears you can collect, so if you happen to cross upon something new, it’s better to put it in the Codex first, unless you want to use it.

Another familiar feature in mobile MMOs. The Monster Identification is basically a monster hit list and an optional side quest rolled into one. Defeating a certain number of specific monsters and defeating bosses will gain you additional character stats. More stats, more CP. Additionally, completing a task in monster identification will also give you items like gold, enhancement materials, and so on. Each map you visit in V4 has a different set of monsters inhabiting it.

We’re not entirely sure if this will be its official name in the Global version but this feature is roughly translated as the Potential feature. It basically works like the Black Spirit in Black Desert Mobile where you can sacrifice items and gears to your Potential to level it up which in turn will give you bonus stats. There are currently four types or phases of Potential, you need to level them up to a certain point to unlock another one.

Companions are your NPC allies. They can be dispatched to perform duties on your behalf. They often refer to you as their captain. You can gain stats based on the type and grade of your companions. Your companion’s stats are directly applied to you. The more companions you have, the stronger you are.

This feature can be unlocked around level 50. Each class has a different specialty Tree. This is where you can further shape your character to your own playstyle. Each specialty will branch off to new ones. You can level them up by allocating points to your desired specialty. Points can be gained by leveling up your character. Once you allocate a point into one, the effect of that specialty will take into effect and will also increase your CP. Effects can range from increasing your stats to different buffs and giving additional effects to your skills.

Engraved Manastones is another feature that solely focuses on making you stronger by giving you a bunch of stats every time you level them up. This is one of the features that will give you a huge boost in combat power aside from your gears. Leveling your manastones is east enough but requires a lot of resources mainly gold and special stones you gain from finishing quests. These quests reset daily and are available in certain areas. The higher the area, the bigger the rewards it will give out.

How to get imprint stones:

You can send out your companions to region conquests and earn imprint stones from there. They can go to any region you discover regardless of their location. Keep in mind that it takes a little longer for a companion to complete a region conquest than it would if you did it yourself. You and your partner cannot conquer the same region at the same time.

Companions can conquer named beings in a region. Like region conquest, you and your companion cannot do the same region at the same time.

It’s not necessarily a permanent way of increasing your CP, but joining a guild does give you a ton of help in a sort of pseudo CP increase in the form of buffs. This ranges from increasing your experience gain when hunting or in a quest, to increasing your attack power and HP for better survivability.

Go on an adventure with a reliable pet. Pets can increase your character’s stats thus increasing your CP as well. You can automatically summon a pet if you have a pet scroll. If you don’t have one, simply go to the pet menu and summon one from there. When the pet’s summon time expires, the scroll will automatically summon them again. You can turn auto-summon off and on from the Game tab in Settings.

And there you have it! The guide has summed up the basics of what you can do to increase your Combat Power in V4! No doubt the game will receive more updates and more features that will affect and increase your CP further in future updates. Got other tips and tricks for increasing CP that you can share with us? Let us know! Don’t forget to follow Enduins for more gaming guides like this one as well as for up to date gaming news and information!