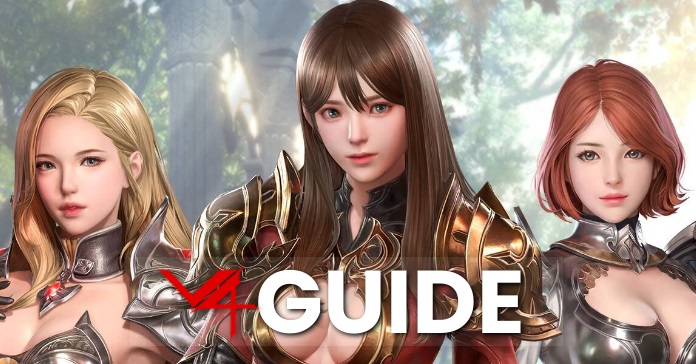 V4 is here! The epic mobile MMORPG flagship by Nexon has hit the global scene and has pushed the boundaries of what mobile MMOs can do. With its deep and complex gameplay, new players might have a hard time navigating the systems and features so we have compiled vital information you need to learn to point you in the right direction when you start your journey in V4! Let’s check them out!

Players can choose from 6 classes, each one has the Demon Hunters’ infernal powers to use freely. This demonic form is briefly granted to turn the tide of battle through fast-paced, hard-hitting combat. The game offers over 50 comprehensive customization options to shape and personalize your character the way you want. Gear up with epic weapons and armor that make your hero even stronger, and unleash your true potential. Don’t forget to bring your pets and mounts along for the ride!

Knights excel in controlling the battle and is a staple for a party. They are masters of the one-handed sword and shield. Knights are not afraid to rush into battle and grow stronger the longer they are in combat, and with the help of their high defense stats, they can fight you all day long.

Warlord is a melee DPS class that focuses on heavy-hitting skills with his giant hammer and gauntlet. They rush into battle and pummel their enemies to the ground. Warlords gameplay is to overwhelm their opponents with savage swings of their hammer, perfect for those who like a straightforward class.

A melee specialist, Slayers are precision fighters who wield a two-handed long sword and a short blade that they use to deadly accuracy. Unlike warlords who bashes their enemies wherever, Slayers, on the other hand, pick their targets and attack weak spots and vital points to deal with high crit damage. They excel in chaining their skills together to unleash a relentless assault on the enemy as well as debuffing their targets making them weaker and weaker. This makes Slayer a perfect pick for those who love PVP.

Gunslinger is the game’s physical ranged DPS class that excels on picking off enemies from a distance. Her weapon of choice is a pair of pistols and a long barrel rifle. Gunslingers can switch their skill sets between battle enabling her to dish out more skills in combat compared to any other class. Gunslingers also excel in high crit damage and have deadly precision.

A magic wielder class, Enchantress is a long-range fighter that focuses on dealing huge magic damage to their enemies. They have a number of AOE skills and have the ability to enhance their skills the more they use it in combat, making her a huge threat if ignored for too long on the battlefield.

A hybrid class, Boomblades wield a unique weapon which is a combination of an ax and a small cannon. This currently makes her the most versatile class in the game, able to adapt from close to long-ranged combat and switching between the two if the situation needs it. She can chain melee and ranged attacks just like the Slayer as well which makes her a very disruptive opponent and a headache for her opponents on the battlefield.

The minimap can be found in the top left of the main play screen. It shows info of the player’s current location and the surrounding geography.

The minimap is always centered on the player’s location. The arrow faces the direction the character is facing.

Enhancing gear is easy. Select the gear you want to enhance and an enhanced scroll to attempt enhancement. Each piece of gear can be enhanced through its guaranteed enhancement stage with a 100% chance of success.

Enhancement can succeed or fail. If enhancement fails, the piece of gear may remain at its current enhancement grade or be destroyed. The penalty for failing enhancement is shown when you register a piece of gear and an enhanced scroll. Make sure to pay attention before proceeding with enhancement.

How to Perform Magical Enchantment

Different stats can be gained based on the type of gear part. Stat values depend on gear grade.

Skills grant special effects and are broken into 2 categories: active and passive skills.

From the skill menu, you can preview skills and view skill details. This is also where you level up and equip skills. Additional effects can also be unlocked and equipped from the skills menu, including effects that are unlocked after a skill has been equipped.

Chainable skills can be used based on equippable skills.

Unique skills are skills exclusive to each class.

Companions are your NPC allies. They can be dispatched to perform duties on your behalf. They often refer to you as their captain. You can gain stats based on the type and grade of your companions. Your companion’s stats are directly applied to you. The more companions you have, the stronger you are.

Soulstones can be developed up to Lv 20 for each grade. Once it reaches the max level, you can increase its grade through upgrading.

The chance of successfully upgrading a soulstone depends on its grade. Failure results in the material used being consumed and the soulstone’s grade remains the same.

Monster Research lists all the monsters that exist in the world of V4. As you eliminate them, you earn their markings. Markings allow you to conduct research and acquire helpful rewards.

There are five stages of research for each monster. You can acquire a separate research reward for each stage. When researching markings, you can either set the number of markings you’d like to research or research all markings. Research status increases in each region every time you research a monster. Additional rewards are given every time you reach a certain value.

Once you’ve researched a monster to stage 5, you can exchange any remaining markings for Hunt Tokens. This can be done through a markings merchant in a camp. The stronger the monster markings, the more tokens you receive. You can set the number of markings you’d like to exchange for each monster or register all monster markings of the grade you want to exchange. Hunt Tokens can be used at Markings Shops to purchase chests containing monster markings.

Region bosses appear at certain times in each region. Region boss battles are large scale raids for up to 300 players. Rewards acquired from defeating a region boss are based on the level of contribution (damage you dealt with the boss). Contribute more to earn rarer and better rewards.

Region bosses appear within 10 minutes of their scheduled appearance time once per day.

The Phantom Abyss is a dream world where the Alliance journeys together. Despite containing their memories, goals, and ideals from their own reality, it still feels surreal.

Depending on the dungeon type, you can use Red Gems or Gold to enter at any time from any place. Tap the “Bard Location” button to find the bard in your region. Visit the bard and pay Gold to enter the Phantom Abyss.

Phantom Abyss Playtime is limited to 1-2 hours per day for each dungeon. You can use a Recharge Ticket to extend the time limit by 30 minutes up to 3 times per day. Phantom Abyss Playtimes and recharges reset at 4 AM every day. When you die in the Phantom Abyss, you revive in the real world. You can earn more EXP, enhance scrolls, and various materials needed for enhancing soulstones.

In Demon Conquest, Evelyn detects demons throughout Syllunas, and the Alliance exterminates them.

V4 has a unique feature called the Dimensional Rift, or more commonly known as the Interserver where you can cooperate and compete with other players across all servers. You’ll be able to join your friends on a massive battlefield for massive open world events. You can enter the interserver through Dimensional Rifts where deadly region bosses and dangerous monsters call it their home. But with big risks come big rewards. Defeating these monsters provides top tier rewards. But be careful, NPC monsters are not the only threat on this land, so keep an eye out for other players and their server affiliation, cause you’ll never know if they’ll be friendly to you or become hostile. Never lower your guard.

A truly free market! The trading post guarantees your efforts are rewarded.

The trading post and exchange house is your one-stop free trade shop. Here you can sell your unwanted gear, extra potions, or unused skill books. You can adjust the price of your goods, collect payments, and view trade history all in one place. You can also exchange in-game gold for cash currency here. Cash currency can buy almost anything in the game from mounts to demon stones.

A guild is a group of players who work together to achieve a shared goal while competing with other guilds. Join a guild to gain benefits and access exclusive content. Players must be at least Lv 30 to create a guild. Once at Lv 30, players can pay 100,000 Gold to create a guild from the Create Guild menu. Players must be at least Lv 15 to join a guild. You can join 1 guild per character. You cannot join a guild if you left a guild (including disbanding) in the last 24 hours.

You can join immediately or send a request to join, depending on the join type. If you have a guild in mind, use the guild search function to find it. You can see guilds you’ve sent a request to, as well as guilds that have sent you an invitation. From here, you can accept, deny, cancel, etc. There are 3 guild positions: captain, vice-captain, and member. Each position has different permissions. The guild captain can appoint a vice-captain. There’s no limit to the number of guild members that can be vice-captains.

We know it’s a lot to take in for a “basic beginners” guide but ultimately, V4 is deep, complicated, and packed with features that make it very engaging. No doubt there’s a huge learning curve to the game but figuring it out is a reward in itself since you’ll be taking advantage of the knowledge you have acquired so far. We hope that the knowledge you gain in this guide will help you on your journey through V4. Download the game now in the Google Play Store and iOS App Store.