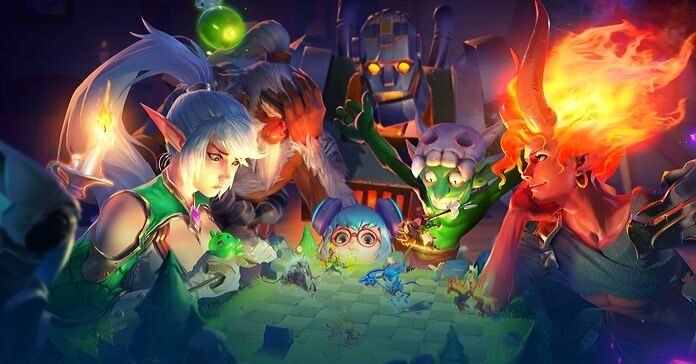 It goes without saying that the Auto-Battler genre, or more loosely known as Auto Chess games have swept the gaming world by storm. Thanks to Dota Auto Chess coming into existence, this new gaming genre (auto-battler) has been born, and since then, a number of auto-battler games have been sprouting out like mushrooms, particularly in the mobile platform.

All auto-battler games generally follow a specific gameplay. You’ll be playing on a board that is very similar to a chessboard. Each turn, players will be able to buy heroes pieces in the store which can be placed on the board or be kept in the reserved area. Each piece has a different kind of role so players must take note of this when placing a piece on the board. You wouldn’t want a mage up front and a tanker at the back, right? Additionally, heroes can be upgraded by buying multiple copies of that specific unit. As the genre implies, battles are automatically executed. You’ll only need to strategically place your pieces on the board. The player left standing wins.

The popularity of this simple yet addictive game formula was so high, that even major gaming companies like Valve and Tencent are having a go at making their own Auto Chess game! With so many of them now, it’s hard to pick which one is best or which one suits you better. Well, don’t worry about that! Here are the top 8 Auto-battler games you can play right now on mobile!

Auto Chess by Drodo Studios can be considered the original and the first Auto-battler game that made gamers go gaga for the strategic board game which was released back in May. Originally made as a custom MOD for the PC MOBA game Dota 2, the creators of Auto Chess has since made their own dev studio and has now published Auto Chess for the mobile platform. Auto Chess follows the original auto-battler formula and features a Global server, fair play, and constant new updates that include new items and heroes added to the roster. The game is available for Android and iOS.

The Valve Corporation, most famously known for the PC MOBA game, Dota 2, has created their own auto-battler game with help from Drodo Studios. Released in June, Dota Underlords uses the heroes from the MOBA game as the chess pieces, so Dota 2 fans will feel right at home in Underlords. The game features a rank mode, an offline mode where you can practice and formulate strategies, seasonal rotation and has cross-platform support. Underlords also has its own lore that ties in with the DOTA world, making the game more in-depth for long time DOTA fans. The game is available for Android and iOS.

One of the biggest surprise entries in the auto-battler genre is Tencent’s Chess Rush. The game had no announcement, nor any pre-hype. They just released it out of the blue and the rest was history. It immediately became the top contender and a threat to all the previous game titles with its polished graphics, gameplay, and visuals. How Tencent kept it under wraps for so long, we do not know, but it’s a welcome addition. The game boasts Tencent’s own designed heroes, excellent hero voice-overs, a turbo mode, co-op mode with up to 4 players in a team, a ranking system, loot mode where you can try to win a gold prize pool, daily quests, and different cosmetics you can collect like avatars and board design. The game is currently out now for Android and iOS.

Another addition to the Auto Battler games, Hero Chess: Auto Battler was released in July by Phoenix One Games. The game boasts simplistic and smooth visuals and currently has 50 uniquely designed heroes of their own. The devs claim it has some quick and snappy gameplay optimized solely for mobile devices. What sets Hero Chess from the rest is that it has a Boss mode you can challenge. Sounds interesting! Hero Chess is available for Android devices.

Published by Imba Games, Auto Chess Legends leans more on the cartoonish visuals and a small installment package which is great for people who are lacking some phone memory space. The game has over 56 heroes currently in the roster with various game modes such as team VS team, one on one, and weekly tournaments. They also have a league system where you can get unique prizes at the end of every season. The devs have promised that they will release weekly updates and events. The game is available for Android users right now.

Arena Allstars basically has all the features the previous titles has including seasonal tournaments, 8 player knockout, practice mode, team mode, and a global leaderboard. Their heroes have a cuter and anime-ish design to them compared to the other entries in the list. They have the smallest roster yet with 30 heroes. Android users can try it now.

This one is a bit late in the running but nonetheless a welcome addition. Onmyoji Chess was a game mode that was included in Netease’s mobile MOBA game, Onmyoji Arena. But due to gaining popularity, the decs decided to totally separate the auto chess mode and make an entire full fledged game around it, following the same auto battler formula, but this time the heroes are from the Onmyoji universe. If you like Japanese myths and setting, you’ll definitely want to try this one out. You can download the game through the Google Playstore.

Magic Chess: Bang Bang is, you guessed it, an auto-battler take on Mobile Legends: Bang Bang. Launched in May, the game has all the traditional bells and whistles of an Auto Chess title, so nothing you’ve not heard about by now. If you’re a Mobile Legends fan, check this one out. The game is only available for Android users right now.

As the auto-battler genre grows more popular, we are sure there will be more Auto Chess titles coming out in the future which will give the game innovative new features and surprising twist. Which ones on the list piqued your interest? Don’t forget that whichever title you choose to play, all of them have the same strategy: synergy, position, and proper fund management. Let us know what you liked best!