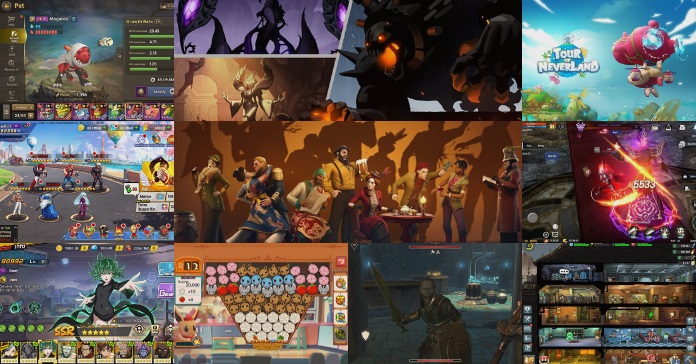 Its that time of the month again where we skim through last month’s newly released mobile games and pick the best ones that came out! We haven’t seen much for the month of June but highly anticipated titles came out nevertheless! Let’s check them out!

Before we dive into the detail, here are some of the best new mobile games for June 2020:

Based on the classic Online PC MMORPG, ROHAN Online, Rohan M will see you explore the world of ROHAN on your mobile along with the game systems that you’re familiar with from the PC version. Your favorite races like Human, Half-Elf, Dark Elf, and Dhan are all making a comeback. Additionally, there’s a ton of entertaining features to try out in the game such as PVP PVE, combination system, open world, dungeon unlocking, upgrade system, and more! Of course, it won’t be a Rohan game without the vengeance system! Take out those players who did you wrong! Sounds good? Head on over to the Google Play Store to download the game now!

Netmarble’s StonenAge franchise just got bigger as it now moves to an MMORPG set up with StoneAge World! Players can immerse themselves in a prehistoric world brimming with dinosaur pets! Gear up to capture rare prehistoric pets and head to Tectonika to stop the rise of the Machine Life! A simple, touch-controlled strategic combat system and fluid turn-based battle system breathes a fresh take on a classic RPG system. Train and progress your pets in unique ways to make them the strongest they can be, collect weapons, and utilize them strategically in challenging battles! You can also dress up in your favorite costume for even more fun! Head on over to the Google Play Store and iOS App Store to play the game now!

As a bread fresh out of the oven! The Asia version of Elder Scrolls: Blades just came out just in time to be included in this list! The Elder Scrolls: Blades is a classic dungeon crawler reimagined for mobile. You take on the role of one of the Blades, the Empire’s top agents, who are forced into exile. On the run, you return to your hometown to find it destroyed. Your goal now is to rebuild and customize your city, restore it to greatness. You can create any character you want and discover unique weapons, armors, and abilities and master the never-ending Abyss with a cutting-edge combat system. If you’re a fan of the Elder Scrolls franchise and want to play it on the go, definitely check this one out. It’s available now for the Google Play Store.

Shadow Knight is a new addition to the classic side-scrolling hack and slash shadow RPG game genre! Save the world of Harmonia from the shadow wars as a Shadow Knight! Battle epic monsters, fight evil enemies to defeat the immortals of Darkness and bring back the light to Harmonia. You can explore many types of complex terrain by running, climbing, jumping! Collect the best weapon, equipment, rune from hundreds of items, then fully customize your Shadow Knight to really stand out from the rest! There’s tons of quest to complete and over a hundred achievements to challenge yourself! If you’re a fan of the genre, head on over to the Google Play Store and iOS App Store now!

Harvest Moon meets Animal Crossing in this social farming game, and it’s surprisingly well made! Will run your very own farm on a tropical island, building it up from ruins to a grand place where everyone just wants to visit! Open up new plots of land, plant crops, construct all sorts of farming facilities, and decorate your cabin just the way you want! Catch fish straight from the ocean or go snorkeling to catch sea creatures. Build a hostel to attract visitors and make fascinating new animal friends! You can even jump in a minecart and explore the depths of the mines in search of priceless treasures! If you’re a fan of titles like Harvest Moon and Stardew Valley, definitely try this out and download it in the Google Play Store.

Pokémon Café Mix is a unique blend of puzzle game and café simulator. Players will take on the role of the owner of a café that serves delicious treats to Pokémon. Complete puzzles by linking together Pokémon icons to prepare drinks and dishes for your Pokémon customers. As your café becomes a hit with the Pokémon customers, you’ll be able to expand the café, befriend various Pokémons, and even gain some to become your staff. This in turn will allow more Pokémon guests and new café offerings. It’s a little neat casual game you can sink some time into! Sounds good? Head on over to the Google Play Store and iOS App Store now!

KOF Final Battle All Star is a mix of trading card game and RPG elements with all the classic arcade titles clashing together in one game that includes popular characters from King of Fighter, Samurai Shodown, and The Last Blade. You can create a team of the fighters to stand alongside you in battle. With more than 100 Fighters available, you can create the perfect team and create extreme combo skills that can give your squad different effects. There are various modes to challenge like 6 vs 6, 1 vs 1. If you want to prove you’re the king (pun intended) of fighters, download the game now on the Google Play Store.

One Punch Man: The Strongest is an officially authorized mobile gacha RPG game adapted from the hit anime, One Punch Man. The game follows the events of anime series closely particularly season 1. Players can fight along with Saitama, and recruit various heroes and monsters, and form your exclusive strongest lineup. Fan favorites like Saitama, Genos, Terrible Tornado, Boros, Dr. Genus, are all present in the game. There’s a variety of different game modes you can challenge like the Institute of Evolution, Association Arena, Unnatural Disaster Challenge, Talent Perfection, multi-player team play, PVE campaigns, and Saitama Combat Mode. The game is available in the Google Play Store.

Fallout Shelter Online is the official sequel to the hit mobile sim game, Fallout Shelter. Besides the classic Vault management feature we’ve come to love, players are now also able to recruit famous heroes from the Fallout series, build adventure teams, face dangerous foes, and venture into the dangerous Wasteland! Whoever survives the Wasteland stands for the Wasteland. Overseer, what you have built up today becomes the future of the Wasteland. Additionally, there are also new multiplayer elements in the game like the guild system and a PVP system where you can pitch your team to fight other players and their roster of Fallout Characters.

Murderous Pursuits was originally launched in the Steam platform but now its also available for mobile as well. You’ll be lurking in a Victorian styled time-traveling airship, where you and seven other players must kill each other in the daring daylight without raising suspicion! Your host, Mr. X, will constantly assign you targets to track down and kill. As you stalk your prey you are also pursued by other party-goers. And there’s always the guards who will lock you up if they witness your bad behavior. You can mimic the actions of NPCs to fool your opponents. Ultimately it’s your job to figure out who among the crowd is the most suspicious one, murder them, and avoid being detected or murdered as well. Murderous Pursuits is available now on the Google Play Store.

There you have it! There were more games to mention, but we opted for the ones that you can download right now for free. On the plus side, the list for June is diverse with different genres! What games on the list do you plan to play? Let us know! And don’t forget to follow Enduins for more gaming news and info!