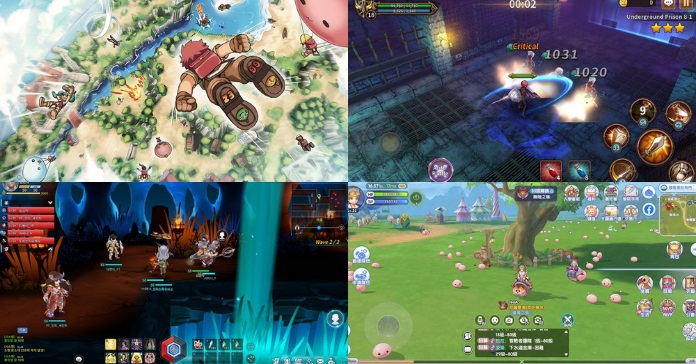 If you didn’t know by now, Ragnarok Online is one of the biggest names in the MMORPG world. Considered one of the greatest influences in regards to online RPG gaming, Ragnarok Online has been a favorite since its first launch 2 decades ago and is still being played even today, thanks to the game’s constantly evolving approach to the market.

Lately, the IP has been expanding its scope, creating new and different games, to MMORPG and beyond, so much so that many of us now are having a hard time keeping track of just how many RO games are simultaneously existing right now. So here’s a full list of upcoming games under the Ragnarok Online IP so you won’t get confused.

Note: This is the 2nd Quarter 2019 Gravity Business Updates

Considered as the most anticipated entry on this list, RO: First Love is a mobile MMORPG developed by China-based studio, Dream Square. The game retains the essence of the original RO, complete with its unforgettable aesthetics, gameplay, and environment, but improves upon these by now making the game full 3D with 360° world view compared to the original’s isometric 2.5D setup. Another additional new feature First Love brings is its environmental interaction. You can climb ladders, sit on benches, and so on. Dynamic in-game weather, a feature becoming common on RPG games lately is also present in First Love, as well as the day and night cycle.

Ragnarok: Online: First Love was expected to be released in 2020 but updates on the game have seemed to have recently stopped since Gravity’s Q2 2020 report had no mention of the game nor was it included in their pipeline.

There’s a running joke in the gaming community that every game title will eventually get a battle royale mode. Ragnarok seemed to have taken this seriously and made a mobile version. Ragnarok Battle Academy’s setting is that of a school where up and coming adventurers in the world of Midgard do their survival training before setting forth to their eventual grand journey. The game is a 3D isometric view battle royale mixed with RPG elements. Just like any BR game, you’ll do battle on a shrinking field. Your goal is to be the last person or team standing. You can achieve this by gathering items on the field, leveling up, and eliminating your opponents. You can also change into traditional RO classes and gain their skills to further bolster your arsenal and achieve victory. ROBA is set to be released sometime in the 4th quarter of 2020.

Ragnarok Origin is a brand new mobile MMORPG that aims to recreate the original feel and aesthetic of the old school RO game and is advertised as so but with the addition of new and modern features like a very responsive touch control system, a mercenary system where you can hire different NPCs to join your party, a selfie camera to take pictures of those memorable events in-game, and an option to make your viewing angle 2.5D or full 3D. Aside from all those mentioned, the game is a Ragnarok MMORPG at its core. RO Origin is already available in South Korea which was received by a positively overwhelming amount. It’s slated to be released for Japan this year with GungHo as the publisher, while the global version is aimed sometime in the future but with no definite date for now.

Another MMORPG, ROX: New Gen will be under Gravity but this time around, ByteDance will be helping them as co-publishers, complete with contract signing. Fun fact, ByteDance is the same company behind TikTok. RO: New Gen closely resembles First Love which is not a surprise since they both have the same developer, Dream Square, which raises the possibility that New Generation might replace First Love, which would also explain why First Love has stopped with the updates. Although New Generation doesn’t bring anything new to a Ragnarok Online mobile MMORPG title, the game is a big improvement of sorts when compared to RO games already out in the market. It has a better and cleaner user interface, better graphics, an improved combat system, and a rather unique and refreshing take on aesthetics as character models and environments are now more detailed and are given some much-needed design overhaul.

Ragnarok X: Next Generation was released for Taiwan, Macao, and Hong Kong on October 15 while the SEA region is expected to launch sometime in 2021.

Jumping to PC, Ragnarok Crusade: Midgard Chronicles was first introduced back in 2019 during the annual G-star gaming conference in South Korea. It is a 3D side-scrolling action RPG set 100 years before the events of the original Ragnarok Online effectively making it a prequel title. The game focuses more on PvP but will have tons of PvE elements as well where you can hack and slash your way through waves upon waves of enemies. The game can be controlled entirely by just your keyboard. The cursor keys are for movement, letters for skills including jump, and number keys for item quick-slots. Additionally, you can assign and organize multiple skills so you can perform chain combos with ease. There’s no definite release schedule for Midgard Chronicles but we might get updates about it sometime very soon.

6The Lost Memories: A Song of Valkyrie

Another spinoff mobile game based on the original RO franchise but this time around, it involves the real world and the world of Midgard colliding in the form of an isekai event where you as the protagonist are teleported to Midgard. The usual isekai shenanigans ensue thereafter where you are destined to become one of many heroes to participate in saving the world and all that. Gravity touts the game as a linear RPG where up to 4 players can form a party against their common enemy. Armor and weapon loadout will play a big role in the game but detailed info about this feature is yet to be fully revealed. Gravity advertises Song of Valkyrie as a “reborn” version of Ragnarok Online, but almost every new RO game coming out is saying that so maybe the isekai setting is just another excuse to make another spinoff title with a different approach on gameplay. The Lost Memories: Story of Valkyrie is scheduled to be launched soon but, again, with the global pandemic still happening, no definite date has been announced.

An overhaul of a now-defunct Valkyrie Uprising mobile game, Ragnarok Project S is a remake of said title, now made in 3D, and will use assets from Ragnarok Eternal Love. Touted as a multi-platform RPG, the game is currently in development and will eventually be released for PC and mobile. Not much has been revealed about Project S’ gameplay, only that it will feature classic locations in Midgard. Aside from that, it’s the usual RO classes, enemies, skills, and so on. We really don’t have much to go on about regarding Project S, so all we can do now is wait for further updates.

A dungeon brawler spinoff mobile game, Spear of Odin has been through multiple Closed Beta Tests since 2016 and has yet to see official service. The game sees you choosing a class and working your way through multiple dungeons, clearing enemy waves and bosses, all the while collecting gears and cards to enhance your character. Cards play a big role in the game since it’s your biggest source of power. You’ll probably spend most of your time in dungeons, collecting more rare and powerful cards and combining their stats, but thankfully there’s a central hub where you can hang out with your friends in real-time. Other features include raid dungeons, multiplayer co-op mode, and PvP. Spear of Odin is still set to be released for selected countries in Southeast Asia with still no definite date.

Still with us? Yep, there’s a lot of RO games coming our way. But if you’ve noticed, each of them targets a specific audience. Do you like side-scrolling games? Here’s an RO game for you. Dungeon crawler? They have that too. Simply choose which genre you would like to play once these games come out to make your life a little bit easier and stress-free. We’ll be sure to update this list when Gravity reveals its quarterly business updates. Which one piqued your interest? Let us know if this list helped you navigate the many upcoming RO games!