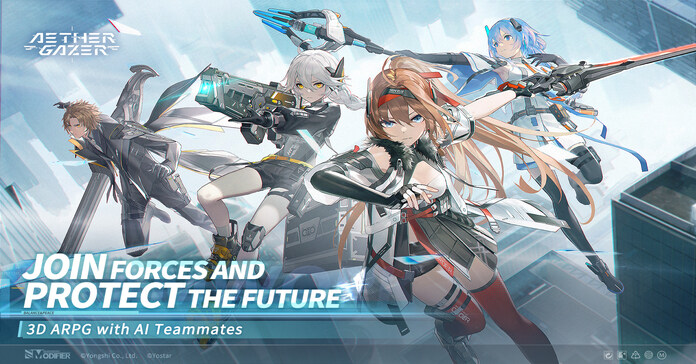 Aether Gazer, an anime-style, action RPG, set in an apocalyptic dystopia, is taking another step towards its global launch. The concept trailer: Elevate Your Mind, is currently awaiting all players. Additionally, several pre-registration milestone rewards are officially being revealed ahead of the release. Aether Gazer will be launched on Android and iOS in North America, Europe, Japan, and SEA. Stay tuned for more upcoming details about Aether Gazer and the world of Gaea.

“Aether Gazer” is a fast-paced 3D action RPG with ample futuristic elements. The high-resolution 3D graphics emulate a sci-fi game world that’s set in an apocalyptic dystopia. Additionally, an audacious worldview and storyline encourage players to act with skill and precision to stop the chaotic dissemination of evil to sustain the balance of human consciousness that’s necessary for pursuing the planned path to Idealbild.

The hardcore gameplay mechanics of “Aether Gazer” allow players to create a squad of three ‘modifiers’ before each battle. The combat mechanics revolve around high-intensity gameplay, as players bring their squad into the matrix to conquer diverse bosses, requiring them to make immediate decisions during action-packed combat. On the other hand, more casual players can choose a support-type character and allow the AI to attack instead. In addition, interchangeable character move sets allow the main character to be paired with other characters for ultimate skill chains.

To ensure the survival of human civilization and the continued existence of consciousness, survivors of the Old World uploaded their consciousness to the data network created by the giant supercomputer orbiting in space, Gaea.Zero. In the new world of Gaea, humans from ten warring areas have been divided into ten continents known as Sephirah Zones, each with its own unique culture. The most representative Sephirah Zones, like Ain Soph, Neuhansa, and Sasanami, are highlighted in the concept trailer. However, underneath the surface of Gaea lurk evil computer viruses called Visbane, bent on destroying humanity’s promised paradise, Idealbild.

“Aether Gazer’s” global pre-registration has opened, along with various in-game rewards awaiting all participating players for each milestone reached. Here are the milestone rewards to expect:

“Aether Gazer” is a mobile action RPG that will be published by Yostar Games and is scheduled to be released globally this year. The regions included are North America, Europe, Japan, and Southeast Asia. For more information about the game, visit their official website.