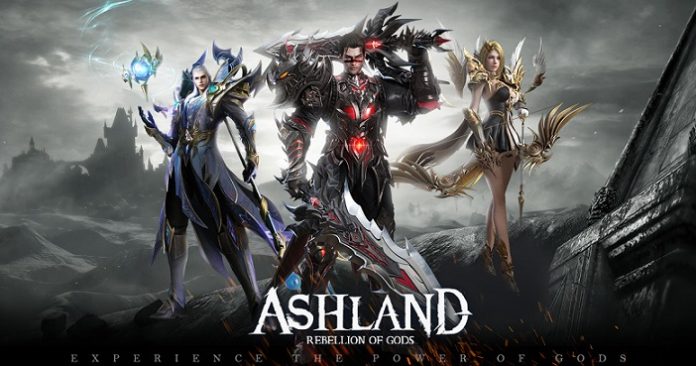 Ashland: Rebellion of Gods is a new RPG that mixes idle gaming with RPG elements all wrapped up in next-gen Unreal Engine 4 graphics. The game has soft-launched in the Philippines so we took a detour within the land of the Gods to see what makes it different from other games and if it’s really worth playing. Link: https://bit.ly/2YYoxxH

Before we proceed, Ashland is giving away a free gift code to start your journey right: ashland888

The gift contains 500 diamonds and 2 courage trial pass. These resources will definitely give you a proper send-off to the epic journey that awaits you in Ashland: Rebellion of Gods!

THE STORY OF ASHLAND: REBELLION OF GODS

During the Eternal War of the Gods eons ago, Nidhogg, Dragon of Ruin, broke the seal in the depth of the Dark Abyss and released Chaos God Azathoth from the control of the Primal God! After centuries of fighting, high gods Zeus and Odin finally threw the Demon God Azathoth into the Void Stream. Before the Demon God disappeared, its blood fell down into Asgard and the mortal realm, creating countless contaminated zones. Demons surged forth in waves, pouring into the world and destroying all life in their path! Now, Athens Parthenon is the only place where divine power remains, the last bastion of hope in the world.

THE DIFFERENT GAME FEATURES YOU CAN EXPECT IN ASHLAND

You’ll start the game by choosing one of the three available classes as your main character. The three available classes are melee type Berserker, magic type Mage, and the long-range Archer. Don’t worry about missing out on experiencing the other two classes as you can eventually unlock them down the road. Each character will be presented to you fully equipped with high-tier gears and weapons which serves as a preview of what your character can look like in the future. But for now, you’ll start off with some basic equipment.

As with any other mobile RPG game, Ashland will throw you in a tutorial session first to get you familiarized with the game controls. The game has a top-down screen that can easily be played with just one hand. Moving your character is done by sliding the Dpad while attacking enemies is automated. You can use your skills by tapping their icons located on the bottom of the screen where the game interfaces, chatbox, and menus are all located.

Playing through the tutorial will eventually set the main storyline of the game and will let you experience the different skills and even the god transformation during some epic boss fights. Once done, you’ll be transported to Athens where your journey begins. Athens is the home of those who worship Athena such as yourself. With her blessing, you’ll be granted her power. But you’d soon find out that her artifacts are missing and so your quest to retrieve them begins.

From here on, the game will now assume its main theme as an idle game. Your character will automatically attack enemies, cast skills, collect loot, and so on. Eventually, you’ll gather enough items to give your character better stats and equipment. Once you feel like you’re fully equipped, you can challenge the boss to progress further on your journey and travel through different settings. It’s only a matter of grinding, making your characters stronger, and then challenging bosses to progress through the stages.

The RPG elements kick in when you unlock the various game features although these are fairly common to see in other recent mobile RPG games. It may look familiar but at least it gives the game some degree of depth not usually seen in these types of games.

Idle games target a different demographic, usually people who are fans of RPG games but don’t have enough time or the attention to grind to make their characters stronger. This is what idle games offer and Ashland goes beyond that by offering great graphics, good character designs, and deep RPG mechanics.

Ashland: Rebellion of Gods offers a ton of various functions and knick-knacks that players can enhance and customize to make their characters stronger.

Ashland offers a ton of different game features, enough to drown the most hard-core RPG players out there. With so many features in the game to dive into, we went ahead and picked what we believe are the most important advanced features players should know in the game.

Ashland: Rebellion of Gods hits the right spots for a good RPG with plenty of features for newbie and veteran players to enjoy at their own leisure without the hassle or the headache that comes along with grinding for resources and materials. It’s also a good game if you wanna kill time whether when you’re commuting or in between breaks since you won’t need to invest a lot of time on the hard and mundane elements of an RPG game.

If you’re on the opposite side of the spectrum and want a hardcore RPG experience with plenty of stuff to do, Ashland offers that as well. There are tons of game modes to experience, challenges to overcome, giant bosses to slay, titles to collect, and heaps of treasure to hoard. And with the number of rewards Ashland gives for every achievement you reach, you’re gonna feel pretty accomplished by the end of the day.

The game is now in Open Beta for the Philippines. There will be no data deletion so enjoy the game to your heart’s content! Android and iOS users can download the game by following this link: https://bit.ly/2YYoxxH. Don’t forget to claim your free gift code once you log into the game!