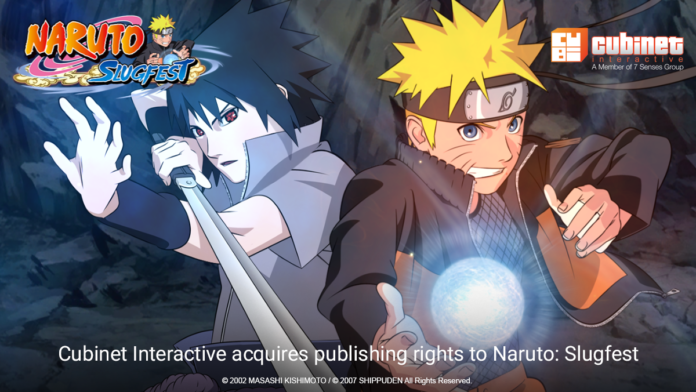 OCTOBER 24, 2019 – The publishing rights acquisition, which was announced today, covers the highly anticipated Naruto: Slugfest Mobile Game which is the world’s first-ever 3D Open World Action MMORPG to be released on a Mobile Platform. The game was initially launched in a surprise Alpha Test this April of 2019. ​

Cubinet Interactive (a member of 7 Senses Group), was founded in 2006 and has published over 40 PC and Mobile titles including Perfect World, Celestial Destroyer, Forsaken World, Battle of Immortals, Yulgang 2 and 9 Yin among others. With over 12 years of excellence, Cubinet Interactive remains to be one of the longest standing Game Publishers in the Digital Entertainment scene in South East Asia and has now extended publishing to other countries and regions such as the US, Russia, Australia, New Zealand, Turkey and the Middle East amassing millions of game downloads. Cubinet Interactive has key offices located in Malaysia, Singapore, Philippines, Thailand, Taiwan, and Hong Kong​.​

What stands out about Naruto: Slugfest is that the game is officially licensed, and it promises a true adaptation of the Naruto Shippuden Series that Fans worldwide love! Naruto is a 20-year standing brand popular world-wide with a solid fan base of millions if not billions. ​

Watch out for the official game launch news and exclusive events by following the Official Naruto: Slugfest Channels​