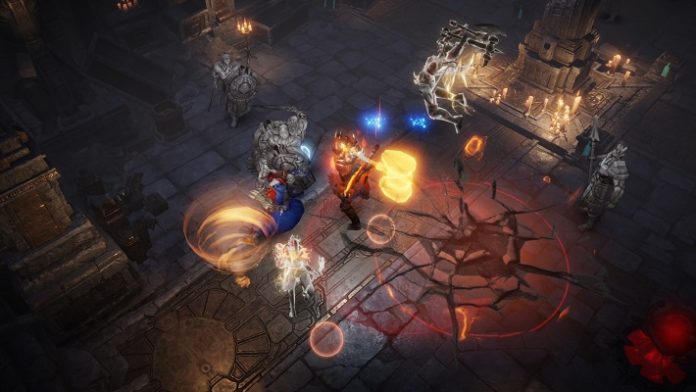 Diablo Immortal is great and is worth every minute of your time waiting for it. It blends the Diablo gameplay you’ve grown to love with the modern mobile RPG tropes that you’ve been accustomed to. The game has an overwhelming plethora of features but you’ll be eased to every part without getting rushed or overwhelmed. Diablo Immortal is shaping up to be one of the most anticipated MMORPG games out there. It’s that good that we’re craving for the official release more than ever. Here’s what we’ve experienced so far.

The world of Diablo Immortal

Diablo Immortal feels like a real Diablo game. The world’s design and aesthetics are dark, brooding, menacing, and immersive even on small screens. The monsters and environment are all carefully designed which gives the game a premium feel even though it’s totally free to play. Diablo Immortal has its own main story that you can follow, but this does not mean it is linear. Players are free to roam and explore the world, find enemies to eliminate, resources to stock up, and many more. Best part? There is no stamina system in the game so explore and raid to your heart’s content.

Leveling in the game is very flexible. Just like most mobile RPG games, you can take on different features and instances that will reward you with goodies like experience, gold, better gear, and so on. If you wish to level up fast, you can do so. If you wish to explore Sanctuary instead, feel free. This approach has given Diablo Immortal a sense of freedom no dungeon crawler game has given to its players in recent memory.

The game takes place 5 years after the events of Diablo 2 and before the events of Diablo 3 and to be honest, Diablo Immortal fits smoothly between the two. Story-wise the events of the game flow seamlessly like it was there all along. Players will start at the familiar town of Wortham which is being plagued by cultists and the undead. Good old Deckard Cain returns for the mobile version as your source of information regarding the events that have been transpiring in Wortham. From here on, you’ll take on the burden of locating and destroying the shards of the Worldstone across the world of Sanctuary in order to prevent a world-threatening disaster.

As you journey throughout the world, you’ll discover new areas, the most important one being Westmarch which will serve as the main location for trade and social activities within the game. This is where all the MMORPG stuff really kicks in. You can interact with other players, see them on the map in real-time, and do activities together like becoming friends in-game, forming raid parties, or forming your very own clan. Yep, there’s a clan system in Diablo Immortal.

Diablo Immortal’s combat system isn’t as complex as Diablo 3 but it’s satisfying nevertheless. Players who are familiar with the two thumb controls will feel right at home in the game while those PC and console players will take a few moments to get used to. You can move by dragging the lower-left control stick while your skills and attack button is located on the lower right side of the screen. User interface fills the upper left and right side while a small chat box is located on the lower center. Despite Blizzard’s effort to make the game’s interface look clean, your screen will still look convoluted. Thankfully you can adjust the layout through the control settings.

Each class has its own unique skills and abilities and this is no mere statement. Each of them has its own animation, design, and unique effect. They’re so much difference in play style that you’ll want to test every character before settling to one or two that you’ll make your main class in the game. Combat is satisfying to the point that you just wanna roam around and find enemy hordes to obliterate. It’s almost addicting, to be honest. Defeating bosses and mini-bosses is such a treat especially when you defeat them and a bunch of gold and loot sprouts from their corpses. Skill aiming is a bit off but it’s not bad. You just need to get used to aiming properly. Some skills can be charged, some are channeled and some are a multi-step skill where you can cast them and recast for an additional effect.

Overall, the game’s control system is great, but it could greatly benefit if it had controller support or better, emulator support. The dev team did say that they’re not gonna block emulators but they also stated they have plans to support right since they’re trying to make the best Diablo game experience on mobile, and we can respect that.

What has been omitted

Skill resources like mana, rage, discipline, etc are now gone for a more simplified system. It’s not necessarily a bad thing, this is a mobile game after all, but this may turn off some hard-core Diablo fans. To compensate for this, the devs added ultimate skills where killing enemies will fill the ultimate bar. Once filled, you can unleash your ultimate skill. Each ultimate differs for each class whether boosting your movement and attack speed or adding special effects like lightning to your attacks.

Weapons are also simplified. Barbarians are now locked into dual-wielding, Demon Hunters as well. Wizards can use staff and a catalyst, while Crusaders and Necromancers will always have a shield for their offhand weapon. Again, do keep in mind that these changes were implemented to fit the fast-paced gaming style of smartphones.

So many game features, so little time

Diablo Immortal has so many features, events, and challenges, you’re gonna need a lot of time to run through them all. Depending on the person, this may be good or bad news. There are your usual daily quests and challenge quests, dungeon raids, boss challenges, and stage instances. There are also bounty quests, replayable rift challenges, massive PvE events, high-level dungeons, and for the bloodthirsty, various PvP modes, and a huge server-wide PvP game mode.

You can always opt not to do some of these but of course, you’ll miss out on the rewards. The game doesn’t punish you that badly for missing out on any of these features but it does hinder your leveling progress. As you level up and travel through higher level areas, you’ll need proper gear as well. The dungeons and instances doesn’t take too much of your time to finish, but it does feel like there’s too many stuff to do for a person with a busy schedule.

Each class in Diablo Immortal offers extensive versatility in skill progression. Throughout your hunt for the Worldstone shards, you’ll be able to personalize your build and fine-tune your character to play the way you want. The 6 playable classes are the Barbarian, Monk, Wizard, Demon Hunter, Crusader, and Necromancer. Blizzard plans to release more classes in future updates.

The return of the Paragon System

Hitting the level cap won’t be the end of your character progression. Paragon leveling returns, modified from its first iteration in Diablo III to fit the gameplay of Diablo Immortal and evolve a familiar Diablo gameplay system. Paragon leveling unlocks upon reaching max level in Diablo Immortal. Upon unlock, you will have access to Paragon trees, each featuring several paths of powerful, learnable abilities with branching points.

Like in every Diablo game, diverse and build-defining loot is at the heart of Diablo Immortal. You’ll find gear dropped by monsters or purchase it from NPC vendors with gold. All your gear is found through play; rare and legendary gear can be ranked up with salvaged materials.

Gems can be added to a socketed piece of gear to increase its base stats. Normal gems provide increased stats such as strength or agility, while Legendary Gems also provide new capabilities, changing up your build and the way you play. For more endgame progression, you can upgrade Legendary Gems by visiting a jewel crafter in Westmarch. You’ll use Runes, a drop also found in Elder Rifts, to craft Legendary Gems. Charms are another avenue for customization in Diablo Immortal; they occupy their own gear slot and carry between one and five bonuses that increase the rank of your skills.

Diablo Immortal will be free-to-play. Players will gain access to everything the game has to offer. There will be no energy system, no EXP boost items, no powerful gears you can buy right off the bat, none of those. No roadblocks, no paywall. Everything in the game that you will need must be earned. So how will Diablo Immortal profit?

For one thing, there’s the monthly battle pass. The goodies found in the BP can also be earned through grinding. The free path even gives you legendary items, while the premium path is still sealed during alpha, but for people who are already familiar with battle passes, we’re pretty sure we might see some pretty cool stuff like costumes or even pets.

And speaking of costumes, Blizzard already said that there will be costumes in the game that you can buy separately. Other monetization includes crests, and specialized reforge stones both of which you can also obtain through grinding in the game.

So whether to spend in the game or not, its all up to you. You can literally play the game and enjoy all of its content without spending a dime. But if you’re all in and you see yourself playing Diablo Immortal for a very long time, AND you’re aiming to be one of the top players in your server, spending some real money won’t hurt with these endeavors. Plus it will support Blizzard to make the game better as well. Remember, yes, this is a game, but also a business. You can’t expect a game to still continue running if it can’t generate revenue.

Diablo Immortal is an amazing mobile RPG game. And from our perspective, it has redeemed itself from that disastrous reveal back in Blizzcon. No, it’s not an out of season April Fool’s joke, no its not a meme, and no just because its a mobile game, doesn’t mean its already trash. It’s a worthy addition to the Diablo franchise, and worth every minute of you waiting for its official launch, that we hope, finally happen soon. It’s a game that is you should be rightfully excited about and excited we truly are.

The goal of Diablo Immortal is to offer up the dark fantasy storytelling, deep itemization, and action-RPG gameplay systems that are core to the game. We’re all excited for the game to come out so hopefully, these guides will help you to gain more knowledge and be prepared for what’s to come.