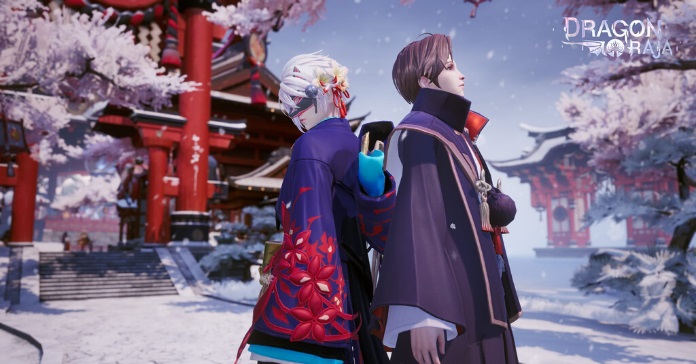 Dragon Raja by Archosaur has been getting a lot of hype lately and for good reason. The triple-A mobile MMORPG, has been killing it in China and now the game is finally launching for the NA and EU regions.

First helmed by the ol’ reliable Tencent Games, Dragon Raja is a next-generation open world mobile MMORPG set in an almost-cyber punk-ish alternate future of our world where ancient myths, magic, and advanced technology collide. It will remind you a lot of Ghost in The Shell and Blade Runner, albeit this one has a LOT of neon lights in it.

The story revolves around an ancient being called The Dragon Lord, the antagonist of the game. It was once sealed away by a group of humans known as hybrids, humans gifted with superpowers. Peace has set across the land, but the recent catastrophic events are pointing towards the revival of the Dragon Lord. Now, the human hybrids are gathering to prepare for the coming battle which is sure to be an epic showdown.

As all recent high profile mobile games are, Dragon Raja is made with Unreal Engine 4. It will offer you a gigantic, immersive world through the use of cutting-edge technology and stunning graphics. You can create one-of-a-kind characters to play, explore, and fight alongside your friends from all over the world. The game is absolute eye candy! It’s full of vivid details, a weather system, day and night cycle, and a huge open world that you can explore freely. Additionally, the game also uses a simulated physical collision system and optical motion capture technology to deliver a “smart” in-game environment that maximizes your gaming experiences. That’s some PC level developing right there, something we don’t see much in mobile games.

Real-time combat and gameplay deliver an electrifying PvP system. You can test your skills in duels, battlegrounds that hold hundreds of other players, or fight for honor and glory through guild matches. Besides that, the game’s PvE system is equally exciting featuring a multitude of unique bosses and riddle-solving making each PvE instance run a fresh experience and not just the usual “finish this quest and move on to the next” scenario.

Dragon Raja is set to launch a limited Closed Beta Testing (CBT) period on February 18 (GMT+1) and will officially launch on February 27 for the NA and EU regions. No news on a SEA release date yet but we can wager a guess it will also be sometime later this year. Dragon Raja is a unique gem. We don’t see a lot of mobile MMO set in the future, so this game is definitely worth a try. Plus, who doesn’t like glowing weapons and equipment that pulses with neon colors? That sounds awesome!