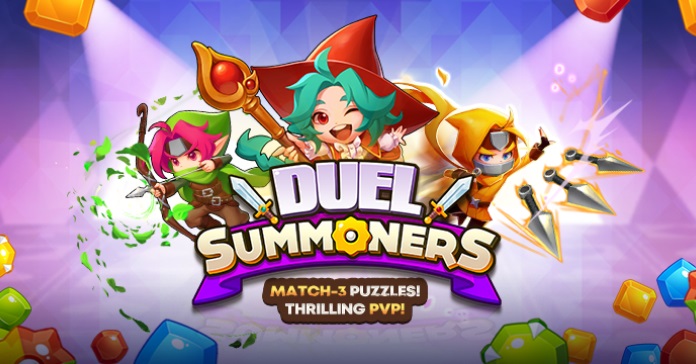 Summoners from around the world come together to engage in furious battles! Players can collect over 30 adorably designed Heroes and assemble teams of four in heated fights on a tide-turning puzzle board where the goal is to link three or more blocks of the same color to summon their desired Hero.

Battles in Duel Summoners are a tug-of-war between players as they solve matches that pull blocks and Heroes away from their opponents. Heroes then automatically attack enemy characters while chipping away at a player’s primary health bar. Each upgradeable Hero comes equipped with a unique skill that can completely shift a match with effects ranging from helpful buffs to vicious attacks.

Online PVP battles take center stage with Duel Summoners as players can join real-time matches with combatants around the world. The intuitive gameplay makes Duel Summoners a cinch to pick up and play, but the fast-paced battles and added layer of strategy from building a sufficient team of Heroes add the depth needed for an online community to grow and support the game.

“With Duel Summoners, We aim to satisfy both the strong tradition of competitive PVP mobile gaming and the need for simpler online gaming experiences that just about anyone can understand and enjoy pretty immediately. The iconic Match Three gameplay has turned out to be a perfect match for our mission to bring PVP to the masses.”

Duel Summoners is available now for Android and iOS.  For more information about the game, visit their social media page on Facebook.