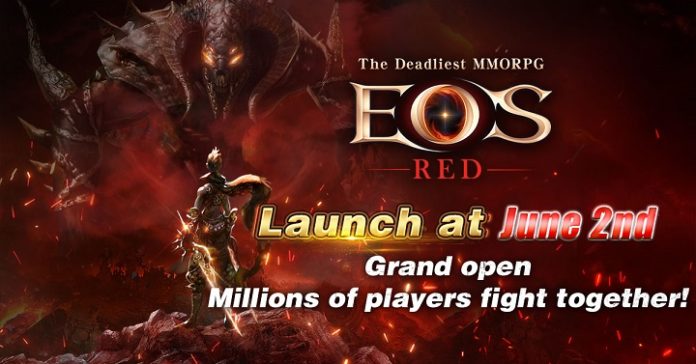 The pre-registration for the Deadliest MMORPG developed by the South Korean BluePotion Games team ”EOS RED” has exceeded 1.5 million players. “Seize your ID” event was well received and ended early at 11 a.m. on May 28th (GMT+8). The official announced today that the mobile game “EOS RED” will be officially released at 11 a.m. on June 2nd in Thailand, Indonesia, Singapore, Philippines, Malaysia and other 10 countries in Southeast Asia. The official also introduced the “Gear”, “Enhancement”, and “Pet” The three major gameplay systems. The players can have the first glance of the deadliest MMORPG!

The pre-registration for the South Korean MMORPG masterpiece “EOS RED” has exceeded millions of participants in Thailand, Indonesia, Singapore, Philippines, Malaysia and other 10 countries in Southeast Asia. The pre-registration has exceeded 1.5 million; The trending topic on both the official fan page and social media is when will “EOS RED” be released! The official announced today that the release date will be at 11 a.m. on June 2nd (GMT +8). As the releasing date is approaching, the “Seize your ID” event has ended early at 11 a.m. on May 28th (GMT +8). Much appreciated for all the supports from the players, the Official promises to do its best to keep stability and quality of the server on the releasing date, to ensure all players can log into the game easily and begin the kill frenzy.

Finding your gears in the field, Dominating the battlefield only with your power

Do you still remember how good it felt when you go crazy clicking the mouse just to get gear in the game? The “Gear system” in 《EOS RED》 will recreate everything in 2021. No more buying gears at the shop, all gears can be found on monsters in the field. If you are lucky, you will make a fortune over a single night; There are white, green, blue, purple, and gold gear according to its rarity, the chosen one can challenge advance monster to increase the rate of getting a rare gear. Don’t worry if you cannot get the gear from monster. You can also collect materials found in the field to craft the gear or trade with other players. “EOS RED” is the mobile game where you can “Farm” your way to the top!

It’s not a dream to have all +11 gear. Enhancing is never counting on your luck

Enhancing is the first thing you do when getting new gear! The “Enhancement system” in 《EOS RED》 is the best in all MMORPG. Not only a better success rate, but you can also really see and feel the stat increase. You can really tell the difference of a simple +1 in both PK and hunting! The chosen one no longer needs to worry about if they should enhance the gear or not, you can always “Dismantle” to restore and use the enhancing scrolls once again! In 《EOS RED》 it is never a dream for an ordinary player to have all +11 gears!

Summon the pet to get the Buff. Sweep strong enemy easily.