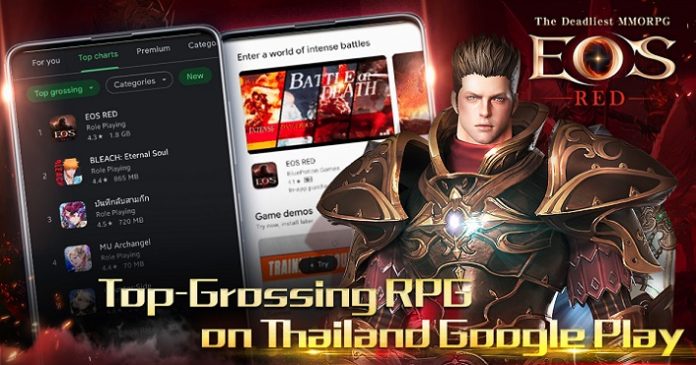 The Deadliest MMORPG “EOS RED” was developed by the South Korean team, BluePotion Games. Was launched on 2 June in Thailand, Indonesia, Singapore, Philippines, Malaysia, and other 10 countries. The Game continues to achieve great results, as it ranks first in the Thailand Google Play RPG TOP-Gross list (4th in Top Chart), with popularity in Indonesia and Philippines are also continuing to improve. “EOS RED” has become a highly popular MMORPG game among the newly launched products; In addition, today’s news also revealed the game-related data in Southeast Asia. Here an introduction of 4 major Dungeons in the game, so that players can enjoy the thrilling and exciting PK sensation.

After the official launch of “EOS RED”, it immediately won first place on Thailand’s GooglePlay RPG list (4th in Top Chart), also ranked 4th in Indonesia and Philippines. It also has been ranked by GooglePlay recommendation as a highly discussed MMORPG game in Southeast Asia. The South Korean team said: “The results in Southeast Asia are very meaningful for our small team. Special thanks to the players for their support and love. We will continue to work hard to bring a better gaming experience to everyone.”

Thousands of PVP Players within the same map as many as 100,000 Online Players

Before “EOS RED” was launched, the players had a superheated discussion and participation. With pre-registration in Southeast Asia that surpasses 1.9 million people, they immediately crowded all of 8 servers in participating in the “Name Pick up” Event.  According to statistics, the number of registered users has exceeded 1 million, with the amount of people playing in the game has reached more than 100,000. Such an excellent result can be called this year’s most popular mobile MMORPG, Becoming one of the best.

Which one did you choose, “Chaos” or “Justice”? Both good and evil souls have their own Dungeon

“Time Dungeon” is a time-limited dungeon, which can obtain more experience points and gold coins than a regular area, even some rare equipment in the game can be obtained in this dungeon. If you are a heavy MMO player, “Time Dungeon” is a must-see place to visit when you have the time. The “Special dungeon” is a “Challenge Tower” with you the one that only fights against the monsters and a “Survival Arena” where you gather with other players to fight against a horde of monsters.

“Justice Dungeon” and “Chaos Dungeon”, as the name suggests, are for both good and evil players to enter. Although becoming a villain will cause the character to lose more experience and items upon death, the “Chaos Dungeon” in the game is exclusively for the villain. Open the door, and obtain these exclusive treasures that only wait for you, and Law-abiding players can challenge the “Justice Dungeon” that is also rich with treasures. From this point, we can also see that “EOS RED” gameplay is quite an interesting and unique MMORPG.

Download the game now. If you want to know more about the latest information about The Deadliest MMORPG “EOS RED”, please visit our official website and official Facebook page.