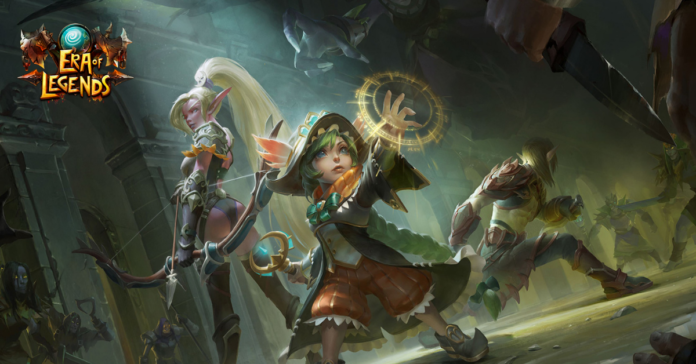 Ever wished there was something like World of Warcraft on mobile? Well, Moscow-based developers 101XP has just announced that their free-to-play mobile MMORPG Era of Legends (English) is coming soon with a pre-registration event already ongoing! The game has already been published in China by Tencent Games (known there as MT4) and is enjoying incredible player growth due to its rich gameplay.

What you can expect from Era of Legends

Eminoor is in peril. The wrathful Dragon God is finally awake and it brings with it the threat to extinguish all life. The diverse races of this world have set aside their differences and have banded together to face the evil that is now engulfing their lands. Armed with swords, magic, and faithful companions, you must rise up and heed the call as one of the heroes that will face the Dragon God! Rise up! There’s a lot of exploring and hero work to do!

Era of Legends, as described above, is rich with lore in a massive and seamless open world of Eminoor, which is around 10,000 square meters. Sprinkled with a plethora of game modes, it’s designed to keep even the most hardcore MMO players entertained. Visit the Grand Divine Dragon City, explore the lands of Baker City, traverse the vast golden meadows, and find hidden mysteries in the Icy Wastelands. Wherever you go, you won’t run out of hero work to do.

Different playable classes from a diverse selection of races are also available, each with unique skills and specialty.

Different kinds of mounts are available to collect, which is a great thing as you’ll definitely need one to travel the huge open world. The devs claim that traveling will be enjoyable as the scenes are chock full of details especially when you have a flying mount. There are also tons of features to keep players preoccupied like Magic Beasts – pets that you can collect which will aid you in battle or give you stat boosts.

There are also different PvP modes for those who are itching for a good match. They range from capturing the enemy flag or resources to 3v3 and 5v5 modes. RPG staples like dungeon raid and boss raid will also be available.

Era of Legends is set to launch around March 2019 and will be available for Android and iOS devices. Visit their official website and pre-register to get a goody bag, exclusive title, and a unique mount.