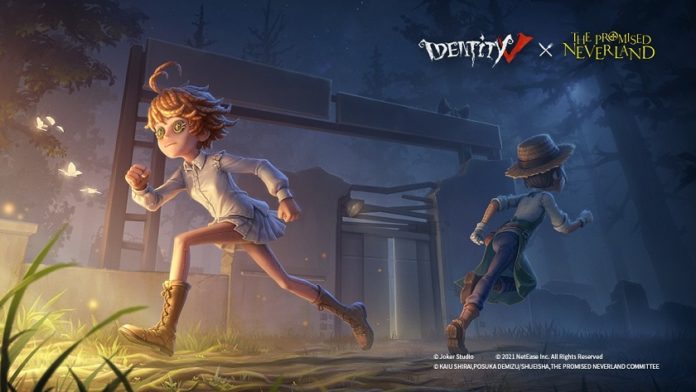 Behind the shattered truth hides the steady gaze from the wretched abyss. The crossover event between NetEase Games’ first 1v4 asymmetrical competition mobile game, Identity V, and the super popular Japanese psychological thriller anime, The Promised Neverland, begins today (February 23) and will last until March 17. It will usher several popular characters from the anime into the Oletus Manor.

A Clash Between Two Giants. Restaging the Desperate Getaway.

The Promised Neverland anime is an adaptation of a popular manga written by Kaiu Shirai and illustrated by Posuka Demizu. The story was staged around a group of children living worry-free in the orphanage, waiting to be adopted. Yet behind the facade of happiness holds a sinister purgatory. They discovered the horrible truth about their “Mama” Isabella and the so-called “adoptions.” In light of this revelation, the children began their escape to the Promised Neverland.

Season 2 of the anime premiered on January 7th, 2021. Once this event commences, the main characters will begin their crossover adventure with different Hunters/Survivors for another round of pursuit and escape in the Oletus Manor.

Main Characters Are Primed and Ready for Action! A Fight For Survival!

Isabella is the youngest “Mama” since the foundation of the orphanage. She tried to escape from the orphanage when she was young but to no avail, and she ultimately succumbed to her fate and became the mama of Plantation 3. Yet when the children escaped, she chose to help them by removing the traces they left behind. When the Bloody Queen transforms into Isabella, will she befit the role and prevent the Survivors’ escape?

Emma is a cheerful and kind child who loves her “Mama” and the orphanage. Once she accidentally found out the truth about the orphanage, she was adamant about helping the others survive even if her “Mama” would get hurt in the process. The Gardener also grew up in an orphanage. When she transforms into Emma and faces the same fate, will the Gardener stay true to her beliefs and manage to escape?

Norman is a clever but physically weak child who witnessed the “shipment” with Emma. He insisted that everyone should escape and kindly offered to make use of his own “shipment” to facilitate the plan. The Embalmer is also a kind and righteous person who entered the Manor to fulfill the wishes of his unfortunate mother. Will he share the same fate with Norman and sacrifice himself for the greater good?

Ray is Isabella’s biological son. He learned about the “Demons” at a young age and planned to escape with Emma and Norman. He is highly intelligent with excellent hands-on capabilities. In the game, the Prisoner is also a genius who considers no sacrifice too great to achieve his goal. When he transforms into Ray, will his intelligence help him escape once again?

Over 5 million players have registered during the pre-registration and unlocked a total of 5 Crossover Essences. These rewards will be sent to players once the Crossover Event launches.

A consecutive check-in event will also be available during the crossover event, allowing players to unlock various rewards by logging in each day. Players can also participate in a wide variety of mini-events, such as multiplayer interactive battle events, trivia, and various new activities to earn fantastic items as rewards!

A fun-filled Manor Quiz will be available at the same time. If you and your teammates are all orphans on the plantation, who will escape before shipping off？ Take the quiz with your friends NOW!

The Identity V × The Promised Neverland Crossover Event is now available. You can download the game through the Google Play Store and iOS App Store. Embark on a thrilling adventure and engage in spine-tingling pursuits NOW! Clock’s ticking; time to run! To learn more about Identity V, please visit their official website and social media page.