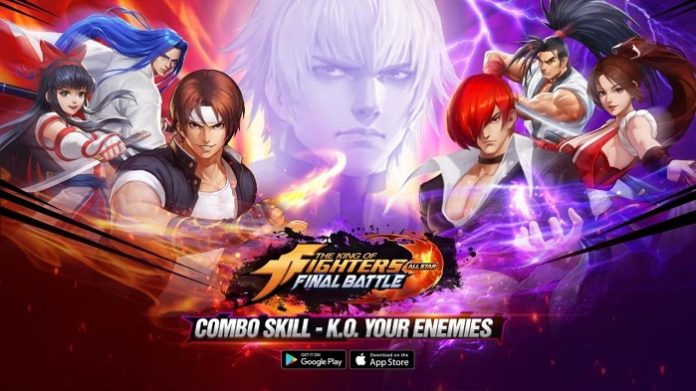 Old school arcade fans will get a kick out of this as SNK Corporation and VNG has just announced KOF Final Battle – AllStar is now available to download and play for Android and iOS!

KOF Final Battle – AllStar is a card-battle strategy mobile game developed by SNK Corporation Japan. The game is based on characters from our beloved fighting game classics including The King of Fighters, The Last Blade, and Samurai Shodown.

The game’s plot comes from the popular The King of Fighters game series. KOF is a martial arts tournament organized by Geese in 1979 to search for strong fighters to help him conquer South Town. When the team members join the KOF tournament, they are sucked into a space rift, bringing them to another world, converging with characters from Samurai Shodown and The Last Blade. The characters (Kyo Kusanagi, Iori Yagami, Mai, Orochi, Terry, Kula, Athena Asamiya, Naokoruru, Tachibana Ukyo, and other gladiators) must fight together to return to their world.

KOF Final Battle – AllStar is a card-battle strategy game, which is so far off from the general 1v1 fighting game style. The new gameplay allows players to build their own squad, offering a diverse system of characters from The King of Fighters, Samurai Shodown, and The Last Blade, along with a gacha mode that turns normal fighters into a dream squad for players.

Aside from forming dream teams and collecting gladiator combos, the game allows the use of skill combos that activate various attributes that help increase damage to opponents.

KOF Final Battle – AllStar is now available to download and play in Vietnam, Thailand, Indonesia, and the Philippines and will be published by VNG Corporation. Download the game through THIS LINK. For more info about the game, visit their official website.