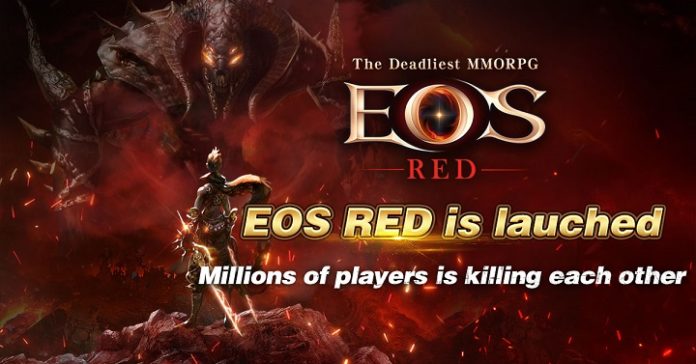 The deadliest mobile MMORPG 《EOS RED》developed by the South Korean Blue Potion Games team has recently exceeded 1.9 million pre-registration. The game is coming online TODAY (6/2) at 11 a.m. (GMT +8) in 10 countries including Thailand, Indonesia, Singapore, Philippines, and Malaysia! To thank the great support from players over Southeast Asia, the Developer has prepared a mystery gift specially made for the players from Southeast Asia! In the meantime, let us introduce “Free Trade” and “Gallery”, the other two major systems, and most importantly the “Guild” system which is a game-changer for the raids in the game. Now we invite millions of players to join us in the deadliest world of “EOS RED”.

The long awaited and the deadliest MMORPG mobile game 《EOS RED》is coming online in 10 countries including Thailand, Indonesia, Singapore, Philippine, and Malaysia on 6/2 11 a.m. (GMT +8). The pre-registration for 《EOS RED》 exceeds 1.9 million. The Official is grateful for all the supports from the players in Southeast Asian that all eight servers are full for the “Seize your ID” event in such short period. To welcome the all players to enter the deadliest world of 《EOS RED》, the Official promise to keep all servers stable with high quality, to ensure all players can enjoy the kill frenzy and the intense heartbeats when enhancing all gears.

The freest trading system, no more worrying about dishonest merchant to rip you off.

“EOS RED” has the freest trading system, no matter it is material you crafted, rare gear, the weapon you found, it can all be send to a specific character and collect the money through the “Package” system. The Chosen one who receives the package only needs to pay the amount requested by the sender to collect the item. Apart from that, the stamps needed to send the package can be bought in shop in the game. A world of what you get for what you pay. Never get ripped off by dishonest merchants.

Don’t dismantle the unused gear just yet. Power up by registering them to the Gallery

The Galleries in “EOS RED” are divided into Common, Advanced, Expert, and Monster. Complete the registration of each gallery to get the gallery effect. The completed gallery can give you additional rewards. Although you can sell or dismantle the unused gears, we highly recommend you register the gear to the gallery to get the additional stats effects. It will greatly improve your character’s battle power.

Join the guild to join the raid battles. Fight along with other members to unlock more guild functions

In “EOS RED” the players are no longer fight by themselves, there are tons of benefits when joining the “Guild”. Not only to fight for the same goal with your friends, with the growth of the “Guild”, it will also unlock more functions. Like guild-only attendance reward, new guild buff effects by leveling your guild through donations. The Guild Raid will speed up the growth of the guild. All these can help the players get stronger in the game. You can buy daily need goods like potions, soulstones, skill books, and pet tokens with guild coins in the guild shop.

The “Mystery Gift” a grand reward from the developer.

To show our gratitude for the great support from the players in Southeast Asia. From today (6/2) to 7/7. The developer specially prepared a series of events and gifts. Simply join the “Adventurer’s Token” collection event. Complete the mission to get the mystery gift “Promise Ring”. Wear this ring to greatly improve your battle power. There are also memorial gift packages, 30% discount on pet draws, weekly hot gift packages, level packages, rare pet gift packages, and other valuable rewards. Make the Chosen one travel freely in the world of “EOS RED”.