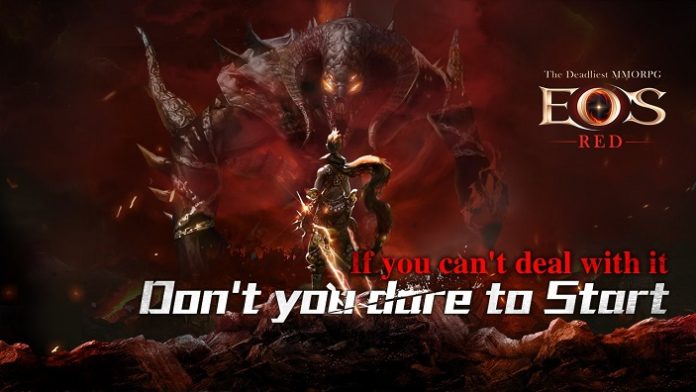 The deadliest mobile MMORPG, EOS RED, developed by the Korean BluePotion Games team, has initiated its pre-register event in Thailand, Indonesia, Singapore, Philippines, and Malaysia (May 5) with the preload on iOS App Store and preload for Android Google Play will be released in near future.

The original title reached 5 million registrations in more than 60 countries, winning the hearts of players around the world, while the mobile version has made 1 million pre-registrations in South Korea, and even reached 1.3 million in Taiwan, Hong Kong & Macao. The first promotional film and game have also been released worldwide, allowing the chosen ones to witness the deadliest MMORPG mobile game first-hand!

Based on the popular PC title EOS Online, EOS RED will be set 50 years later after the events of its predecessor. The team behind the game will not only continue the story of EOS but will also recreate the authentic characteristics of the MMORPG with the unique PK system and free economy system. After EOS RED launched in Korea, the game ranked:

The First Preview of this Worldwide Film – When the World Lose its Order, Slaughter Becomes the Only Way

In the legend of this ancient continent, the Gods and the Titans started a war for power. In the end, the Gods won but paid a hefty price of “falling into a deep sleep and not knowing when they will wake up”, and this caused the world to suffer a loss of order. Upon surviving this legendary time, the remaining human calls themselves the “Chosen Ones” and the time to unleash their full potential has come.

To restore the order in the continent, the Chosen Ones fought fiercely, and yet no one was fighting for the right cause, but merely to survive on the continent. Hence, killing has turned into an instinct, and the strongest rules in the world have become the norm of a long era of war. Who can put an end to the war? Or bring more chaos into the world?

iOS users can now pre--register for the game. You can also participate in the “If you can’t deal with it, don’t you dare to start ” pre-register event to get a chance to win 60 dollars’ worth of in-game goodies while waiting for the official launch. (Android pre-reg coming soon)

After completing the registration, you can participate in the daily Gear Enhancing event to earn points. The higher the gear level is, the higher the points you can earn. In addition to the event stage rewards, the person who accumulates the highest points can also get the rare purple pet “Tin Knight”!

“I’m very happy that EOS RED will be launched in Southeast Asia, the production team will bring forward their most attentive attitude to all players and create the best quality of the game environment, So all players, please stay tuned and quickly participate in the pre-register activities!”

Hurry up and call your friends to bring along their weapons to participate in this pre-register event. After completing all the activities on the page, you will be certified as the Chosen One. Receiving rewards will allow you to earn treasures and PK without any disadvantages. Are you ready to pledge with blood? For the latest information on the deadliest MMORPG EOS RED game, please visit the official website and official fan group.

MU Archangel: The new mobile MMORPG spin-off is now live for Android and iOS in SEA!