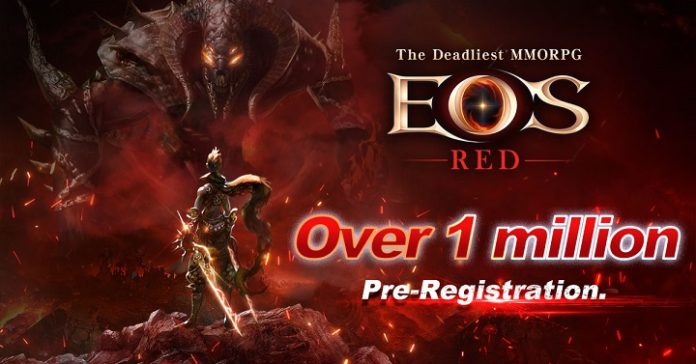 The pre-registration for deadliest MMORPG ‘EOS RED’ developed by BluePotion Games team has pass 1 million in Thailand, Indonesia, Singapore, Philippines, Malaysia and other countries in Southeast Asia. All servers for “Seize your ID” event are full. The official has opened more servers for the event. The official also release the world first “Bounty” system for player to have a peek of how violence is use to solve all problems in the world of EOS.

Over 1 million participants of EOS RED Pre-registration in Thailand, Indonesia, Singapore, Philippines, Malaysia, and other countries in Southeast Asia within just 2 weeks! The official appreciates the support of all player, and says the pre-registration can be successful in Southeast Asia is because of the good reputation received in Korea, Taiwan, Hong Kong, and Macao.

At the beginning OB in South Korea, the DAU (Daily Active Users) reaches 100 thousand. New server opens every day. The game is nominated as one of the top 5 MMORPG as it went online. At the beginning OB in Taiwan, Hong Kong, and Macao, the DAU reaches over 150 thousand. It also ranked top 2 in iOS App Store and top 2 in both free games and top revenue in Android Google Play.  The Official thinks the passion of the chosen ones in Southeast Asia will not be less than South Korea, Taiwan, Hong Kong, and Macao, the game will be another big hit in the area!

When you kill you pay with your life, even the strongest ones will be hunted.

There are many reasons why ‘EOS RED’ is considered the deadliest MMORPG of the year in South Korea. The world’s first “Bounty System” is one of the very reasons. In the world of kill or be killed, you need to stay alert at all times, the enemy will show you no mercy. In normal MMORPG, once you are killed by other player, it only shows who killed you for you to get your revenge. However, what if the enemy is stronger than you? Should you just let him/her get away? In ‘EOS RED’ don’t worry about you are weaker than other. As long as you are willing to pay the bounty reward, you can find the chosen one to get even with your enemy.

All servers are full for the event “Seize your ID”! The most popular class will be revealed soon.

Over 1 million participants of ‘EOS RED’ Pre-registration in Thailand, Indonesia, Singapore, Philippines, Malaysia and other countries in Southeast Asia within just 2 weeks! All servers for the “Seize your ID” event are also full in just 3 days. The official has open more servers for the event. As of today, we have more chosen ones from Philippines. As for the most popular class, the rogue with high mobility is our champion now. The event is still in progress, and the official has open more servers. The chosen ones have seize their ID may join today, what are you waiting for, act now!