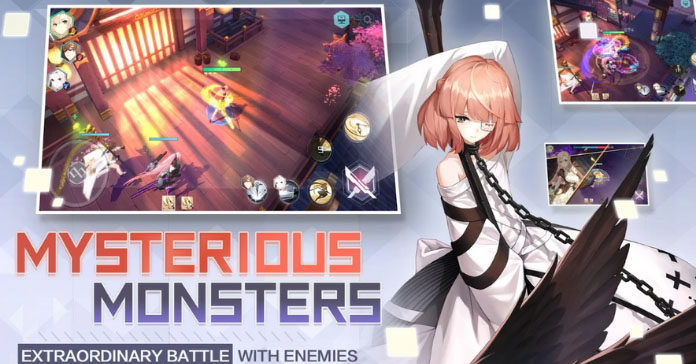 Netease Games (Rules of Survival) and X.D. Global (Ragnarok M: Eternal Love) has joined forces to release the English version of Eternal City! This is after a very successful launch in South Korea, Taiwan, and China. This brand new mobile action RPG with collectible hero elements wrapped in stylish anime- visuals and design will be available for both Android and iOS, and the developers promise a unique and captivating mobile hack and slash experience.

The game’s story takes place in a modern city beside the sea. One day, the Black Gate (a mysterious portal connected to another dimension) manifested itself in the city, enabling monsters to invade the world. Peace was obliterated and chaos reigned in a matter of hours. But the Black Gate had an effect on people as well. It unlocked hidden powers within individuals that made them able to wield mythological weapons. These special individuals, dubbed as “Wielders”, are the only ones who can fight the invading monsters and close the Black Gate. An association called the “Central Department” was then established to gather the Wielders and find a way to put a stop to the Black Gate once and for all.

Players will assume the role of a commander of sorts with a special rare ability. You’ll be able to take control a team of  Wielders and hack-and-slash your way through hordes of enemies and bosses that pour out of the Black Gates. The game is made with Netease’s self-developed game engine, ensuring unique graphics on mobile devices  with 2.5D anime-style visuals. And speaking of anime, many well-known names from the industry lent their skills and talents for Eternal City like master musician Kawai Kenji, who made scores for Ghost in The Shell, Patlabor, Gantz, Mobile Suit Gundam, and many more.

In addition, popular Japanese CVs also gave their voices to the game characters. A few worth mentioning are Hanazawa Kana, who voiced a ton of anime characters like Rize from Tokyo Ghoul, Nadeko from the Monogatari series, and Ayase from Guilty Crown. There’s also Uchida Maaya, the voice of Rikka in the Chuunibyo series, Alluka in Hunter x Hunter, and the Guild Girl in Goblin Slayer. Lastly, there’s Kugimiya Rie, who voiced Alphonse Elric in the FMA series, Taiga from ToraDora, and Happy from Fairy Tail.

The pre-registration is now open for both Android and iOS. You can also pre-register on their official website. A pre-registration milestone is currently ongoing. Achieving certain milestones will get you the following in-game goodies when the game launches:

Eternal City is scheduled to launch on May 9, 2019. So, what do you think? Will you playing this new game or will you stick with your current favorite? Hit the comments below!