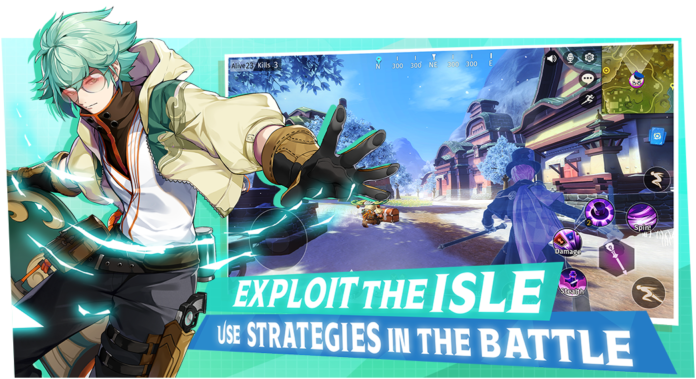 Netease is preparing for the English closed beta testing of their newest mobile battle royale, Eclipse Isle. This BR game sets itself apart from the rest by adding RPG elements to the mix. Previously known as Operation Windcloud Island (风云岛行动), it is one of the many battle royale games announced for mobile by Netease back in February 2018.

Eclipse Isle is touted as the “first” Hero Battle Royale game self-developed by Netease Games for mobile. It tries to combine hack-and-slash action RPG with the tense and strategic gameplay of the battle royale genre. Players can choose from a roster of unique heroes that will participate in Eclipse Isle, the island where the game is set. You’ll be pitted against 59 other players to see who will be the last survivor in a slowly shrinking field. All players will first land on a “safe zone” and then the all too familiar gathering of gears and resources will kick into play. The combat, on the other hand, is far from what you’ve seen from the likes of PUBG or ROS. Heroes have different set skills just like in MOBA games and RPGs, a specific weapon specialty, and different strategic gameplay. Some excel in long-range combat, some would rather fight head-on, unleashing their close range skills, and some who would rather be stealthy and strike from the most unlikely places.

Hero skills vary on the weapon equipped and can be used to perform combos. It’s up to you to find out how to use them in the right order and at the right moment. Even though the heroes have a specific type of weapon specialty, you can still use other weapons you find whether it be a deadly scythe for melee combat or a long-range one like a bow. The map is not static. It’s pretty much alive in a sense. It has different seasons from spring, to winter, and there are a huge number of interactive elements scattered throughout the island that will give advantages to a player like the ability to ride horseback, camouflaged areas to set up an ambush, enemy tracking, stealth attacks, and even cooking.

Players will also encounter monster camps and find hidden treasure chests that contain high-tier gears and resources. Be careful though, as opening chests will leave traces that other players can track. There are also props scattered around the island which you can use to disrupt a pursuer or to distract your target. Getting chased? Simply go hide inside a barrel when you see one.

The CBT period for Eclipse Isle will start this month (April) and will be available for Android users only. The iOS version will launch later on. A PC port is said to be currently in development and is slated to be released after the global launch of the mobile version. You can visit their official website but there’s nothing much in there right now. There’s no official date for the OBT, but you can count on us for updates! So don’t forget to follow Enduins for more gaming news and information!