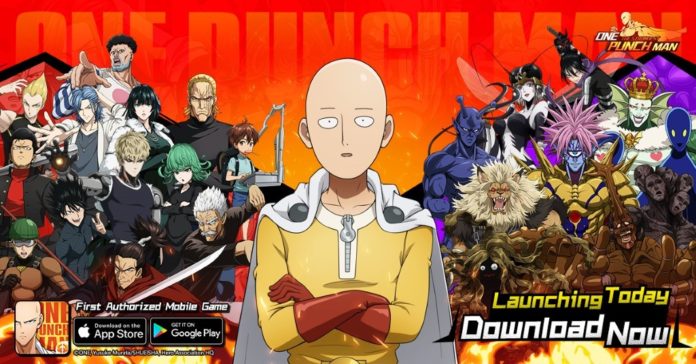 Fans of the ONE PUNCH MAN manga and anime series have been excited to know, ever since the news about the very first official mobile game based on the series came out, when will it be coming to Southeast Asia. And now, we have the answer – today!

ONE PUNCH MAN: The Strongest is a card-based mobile game developed by Playcrab and published by Finger Fun Entertainment. It is officially available on iOS and Android devices in Southeast Asia today, June 16. Players from Southeast Asia countries can download ONE PUNCH MAN: The Strongest from Google Play and App Store. The game supports English, simplified and traditional Chinese, Thai and Bahasa Indonesian.

Starting from early April, more than 4.7 million players joined the pre-registration for ONE PUNCH MAN: The Strongest. Not only do all pre-registers have the chance to receive top-level in-game rewards, but they can also win incredible prizes like iPhone 11 Pro, Macbook Pro, Sony digital camera, and even gold bars will be offered just by following the official Facebook account.

ONE PUNCH MAN: The Strongest is a combination of gacha and card games, two very popular genres for mobile game players. Aside from a brand-new, original storyline, the game also features the anime’s original voice cast, which will no doubt add more incentive for fans of the show to jump right into the action.

Players can take on the role from one of four major character types in the ONE PUNCH MAN series, such as heroes, monsters, villains, and martial artists. These can be used in any combination to do battle with enemies (monsters and heroes from OPM working together, imagine that). Winning battles allows players to collect upgrades to use on characters, as well as new cards to slot into their team.

Speaking of which, players can form unique combinations of teams such as series, factions, and roles, in order to take their strategy to the next level. Advancing through the storyline might even let new characters get new skills along the way.

Also, here’s a quick lowdown on some of the more popular heroes players can collect in ONE PUNCH MAN: The Strongest:

ONE PUNCH MAN: The Strongest will launch on both iOS and Android in Southeast Asia today. In conjunction with the game’s release, online events will also take place, you can check them out in the game itself.