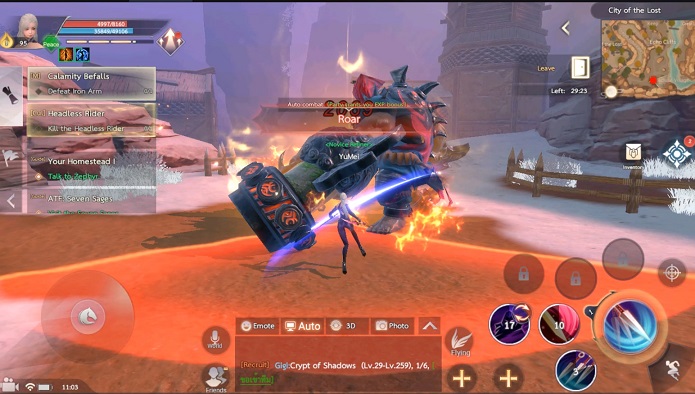 Today Perfect World VNG officially expands their already massive world with the debut of Assassin – the newest class under the Untamed race. These black-clad melee fighters are specialists in 1-on-1 combat. If you choose to be an Assassin, remember to utilize their special ability to be Invisible. If you’re facing an Assassin, be aware of their great damage and super fast blinding attacks.

In order to handle Assassin, the older classes have their skill set adjusted. For example, the pretty Vulpine will be able to detect and reveal an invisible Assassin. Blademaster can apply the stun effect on every target regardless of their Anti-Stun level. Wizard can disappear (for a moment) after freezing. Meanwhile, the healing effect will be removed from Cleric.

Don’t forget to explore the new item: Sack. There’s no need to complete any quest to use Sack, just get it from the Market or Dungeon. This new item can help you to enhance your strength by automatically activating the items put in Sack. Talk about the weather, you can enjoy the winter in Perfect World VNG with the new map effect: Snow.  Also, two older classes of Untamed can use their new skins: Leopard for Barbarian and Cat for Vulpine.

In case you haven’t known, Perfect World VNG is the official mobile version of the legendary fantasy game Perfect World. The well-known massive world which you guys once lived in now is brought back with many adjustments and upgrades. However, its core values ​​are still there for you to relive your childhood.

Assassin and those new updates are waiting for you to explore right now.

MU Archangel: The new mobile MMORPG spin-off is now live for Android and iOS in SEA!