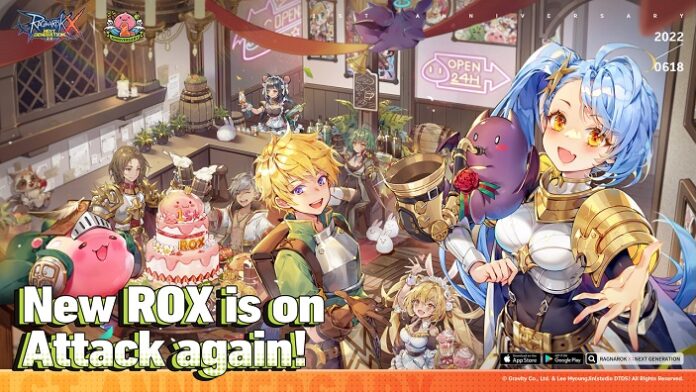 Time flies when you’re having fun! We can’t believe it’s been a year since the launch of ROX… Starting today, the game will be celebrating its 1st Anniversary with tons of new content updates including second class jobs, the multi-class system, quality of life changes, and in-game events. That’s not all – there will be limited-time pop-up stores set up for Adventurers in Thailand, the Philippines, and Indonesia, which will bring the world of ROX experience offline! Read on to find out more details about these exciting events…

Celebrate 1 Year of ROX with a Fireworks Extravaganza!

During the anniversary event period, the NPCs of Prontera will be dressed in anniversary costumes. Houses, towers, streetlights, and all the surroundings will be decorated to match the festive season. There will be a fireworks show behind Prontera Palace at a fixed time every day. Adventurers can come together with their guildmates or partner(s), find a perfect viewing point, and enjoy the show! Don’t forget to take some pictures along the way!

It’s been an eventful year in the world of ROX. Players will have access to ‘a year in review’ data, including the total number of days played, growth record, social relations and so on. Players can get an advanced social action reward by participating in the anniversary memoir activity. Check out your Archives now!

Returnee Event – Odin’s Level Up Buff (up to 10 times)

Players who have not logged into the game for the past 7 days will be given the Odin’s level up buff when logging in during this anniversary celebration period. The Odin’s level up buff will provide massive EXP for you to level up quicker. Furthermore, Players who return during this period can get other benefits worth up to ten million crystals. This includes enchantment materials, refinement materials, monthly cards, permanent costumes, mounts, headgear, and much more! Team up with friends to get a team exclusive bonus!

Accomplishing missions from the “Daily Mission Board” has become easier than before. Adventurers can use crystals to buy Mission Order in the trading centre to accept daily missions and claim rewards more easily. If you have some mission tokens to spare, you can also trade them for crystals. Note: You are unable to use Mission Order for special missions

Two new 2nd class jobs will make their debut in ROX. Players can now play as a Monk or a Crusader. Both jobs feature unique skills and characteristics.

Monks are the newest introduction to the Acolyte class. There are 2 distinctive styles, namely Combo and Air Ballast. Combo specializes in melee battle and uses heavy-hitting gloves to deal with powerful punches. At the peak of the battle, Monks can unleash Asura Strike to wipe out all enemies in their way. Air Ballast is a great option for Adventurers who prefer to attack at range. Gilded with light gloves, you can roam on the edges of the battlefield and instantly wreak tremendous destruction on enemies!

Crusaders belong to the Swordsman class and are a combination of Martyr, Guard, and Judge. The Martyr offers a wealth of combat EXP and survival techniques, sacrificing some of their own HP to unleash Fearless Charge on the enemy! The Guard, as its name suggests, grants staunch support to companions by protecting them and increasing their defense as they march forward! Lastly, the Judge, the Holy Light of the believers… Using your spear, summon Malefaction and deal large damage to eliminate your enemies!

Also accompanying the two new 2nd Classes is the Multi-Class system. This Multi-Class system will allow players to change between various classes instantly while retaining their base level and job level from the original Class. You can now enjoy playing all the jobs available in the game without the hassle of creating a new character.

Starting June 18, ROX has set up pop-up stores in Manila. The pop-up stores are meticulously decorated with the “ROX Anniversary” theme. Players can experience the atmosphere of ROX, and taste delicious ROX anniversary-themed food at the pop-up store. There are also many exciting and interesting activities waiting for adventurers to participate in!

During the event, the pop-up store will be equipped with a claw machine. Visitors can redeem a token for the claw machine by providing their game ID. Rewards include Poring lights, Poring key rings and in-game monster magnets, and other beautiful prizes. There is also a message wall where visitors can write their best wishes for ROX’s 1st anniversary. Additionally, there is a super cute Poring cotton candy machine. Let the cotton candy bring Adventurers even more sweetness as they celebrate ROX’s first anniversary!

During the event, famous cosplayers will come to the store every day to celebrate ROX’s first birthday with the players. Feel free to take photos and interact with the cos-players to celebrate this once-in-a-lifetime event!

On June 3, ROX officially announced a collaboration with Attack on Titan. The collaboration comes with new limited-time gameplay called “War of Freedom”. Adventurers will randomly be divided between the Human Camp or Titan Camp and fight with the other camp. Winners will be rewarded with awesome prizes, of course! Moreover, the ROX x Attack on Titan collaboration also brings with it some beautiful special-edition costumes and mounts.

It has been an eventful year for Ragnarok X: Next generation! The ROX team has been working tirelessly to give you tons of new updates and challenges to pull through. Their first year anniversary will surely keep fans busy with tons of activities both online and offline! For the latest news and updates, follow ROX’s official social media page. What are you waiting for? Download ROX now and join in on the fun!