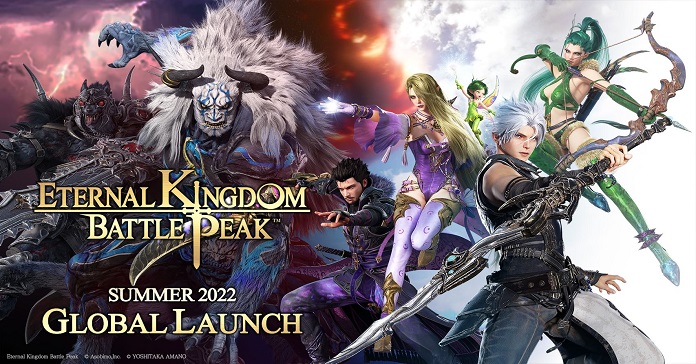 Asobimo has announced the global release window for the new multi-platform MMORPG “Eternal Kingdom Battle Peak!” Codenamed “Project Eternal” in Japan, the game will be available for Windows PC, Android, iOS, PlayStation 4, and PlayStation 5. Pre-register now and receive awesome goodies including a costume set and pet.

The game features world-renowned creators such as Yoshitaka Amano (Final Fantasy Artwork) for character design, LUNA SEA for the theme song, and MONACA for the in-game soundtrack. You can enjoy an epic storyline with characters accurately recreated in 3D from Yoshitaka Amano’s designs, as well as adventures in a vast field where the weather changes from day to night. The game also offers a full range of battle content, including “Siege” where up to 200 players battle, “Arena” where you battle with a small number of players, and “Battlefield” where up to 30 players can fight in fierce battles.

In preparation for the release, pre-registration is now available via Steam, Google Play, App Store, Twitter, and email. In addition, a pre-registration campaign will be held to obtain an avatar costume set and a pet “Ghoul,” as well as an RT campaign to give away Visa Prepaid Cards worth up to $70 in total, and a Twitter point campaign to get avatars.

Pre-Reg Now To Get Costumes And Pet

“Eternal Kingdom Battle Peak” is set to officially launch in the summer of 2022 which means we can expect the game to be available around July or September if there are no delays. As of this writing, no official release date has been announced just yet. For more information, visit their official website.