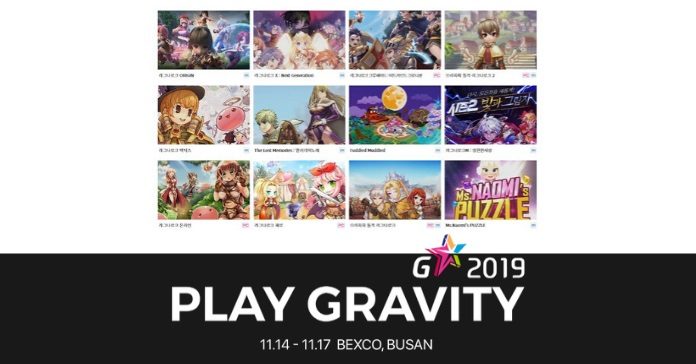 Just a few hours away until the biggest gaming convention in Asia opens! The annual G-Star 2019 will be full to the brim with flocking game enthusiasts, major gaming companies, and of course, their long-awaited game reveals! Gravity Co. has already announced its massive lineup for the convention! Let’s check them out now!

Ragnarok Origin will be a brand new mobile MMORPG developed by Gravity. It is touted as one of the company’s main title lineups and will aim to recreate the original Ragnarok Online with better graphics and overall better gameplay mechanics using the technology and the resources we have now. The game will also feature a new broader expanded map and a life system that includes mining, gardening, fishing, and many more.

A brand new 3D mobile MMORPG! Players will play as one of the descendants of Odin, who controls the fragmented heart of Ymir! You are tasked to prevent the Midgard crack! ROX: New Generation is a new and modernized reinterpretation of the classic Ragnarok Online! Players will be able to enjoy brand new areas that were not present in the original RO like the cute theme park concept that allows you to ride the carousel, toy train, and Ferris wheel. This is the same game released in China with the alternate name, RO: Birth of The New Generation which has already launched a few closed beta testing phases. It seems like they rebranded the game to Next Generation for the South Korean Market.

Ragnarok Crusade will be a brand new MMO for PC with a 3D world view and graphics. Set 100 years before the events of the original Ragnarok Online, players will be transported smack dab in the middle of the ensuing conflict between the factions of Rune Midgard and the Republic of Schwartzvald. Uncover the story of Arunafeltz, and the pope serving the Goddess Freyja while progressing through the game. Ragnarok Crusade: Midgard Chronicle will focus more on PvP and will feature authentic RO world aesthetics.

Urachacha Go revamps the visuals of Ragnarok Online and made a cute anime-style idle MMORPG! The game will have advanced gameplay and graphics. Despite the new visuals, the game will still stay true and be a faithful reproduction of the original Ragnarok Online. Urachacha Go will be available for both PC and mobile platforms.

Ragnarok Tactics takes all the characters and monsters from the franchise and make them units for this 3D mobile strategy game! Players will cultivate powerful legions of their favorite RO monsters and put their strategic abilities to the test. A variety of challenging and entertaining combat systems will be available in the game including arenas, PVP, and MVP hunting. You can feel the exhilarating taste and exciting strategy in real-time PVP.

The game is a spin-off story RPG that takes place in the world of Ragnarok Online. Players will assume a character from the real world who got transported to Midgard. Throughout your journey, you’ll meet new friends along the way who will join your party. The game will use the classic RO sprites and assets but will be modernized to an extent. Since the game seems to focus on the RPG side of things, Lost Memories will have a linear story that players will follow much like console JRPGs.

Amazingly enough, Gravity made a game that’s not related to Ragnarok. Mrs. Naomi’s Puzzle is a  beautiful match-three Jewel Puzzle World. Players will embark on an adventure in a glowing ice land. The controls are very easy to learn and the game can even be played offline! Naomi Puzzles is a match-three puzzle game that anyone can play anytime, anywhere. Experience hundreds of different stages with different challenges, missions and more!

Play a new concept in the Grow game genre that’s becoming popular right now and challenge your brain! Combining seven buttons lets you experience over a whopping 5,040 different worlds. The game has many endings, and finding the best combination is the ultimate goal! The game hints that the best ending is hidden in the story so better pay attention.

A few more game titles are included that will be featured during the convention namely Ragnarok M: Eternal Love, Ragnarok Online, Ragnarok Zero, Urachacha Go Ragnarok, and Teppen which brings the total game lineup to 13.

The gaming company will be revealing more information about their massive game lineup during G-Star 2019 that will start on November 14 until November 17 in Busan Exhibition and Convention Center, South Korea. Tune in to Enduins for more gaming news and information!