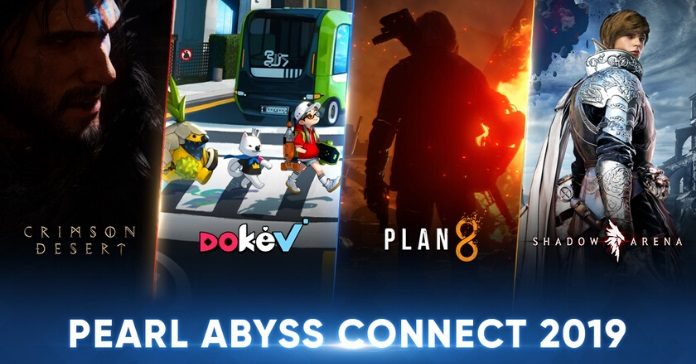 Pearl Abyss CEO Kyung-In Jung has recently announced the official names of multiple game titles accompanied by teaser websites for each game. The games PLAN 8, DokeV and Crimson Desert are all planned to be officially revealed during the annual G-Star 2019 gaming convention in South Korea. Through their teaser site, the tentatively named Project K is now confirmed to be as Plan 8, Project V is DokeV, Project CD is Crimson Desert, and the action battle royale Shadow Arena will be presented in the company’s G-Star booth.

Plan 8 is an exosuit MMO shooter, a title spearheaded by Minh Le as a Technical Advisor, also known as the co-creator of the Counter-Strike franchise. A trailer for Plan 8, the first shooting game from Pearl Abyss, will be released at Pearl Abyss Connect. The game’s production is led by Seung-ki Lee, former Environment Art Director of Black Desert Online and Black Desert Mobile.

Crimson Desert is an open-world MMORPG set in an epic fantasy world. In a war for survival, three tribes will fight for control of the Pywell continent. Crimson Desert has been produced since 2018 by Jason Jung, former Game Design Director of RYL Online. Working alongside Jason Jung on RYL Online, one of Korea’s most famous first-generation action MMORPGs, was Dae-il Kim, the founder of Pearl Abyss. Eter Lee, former Lead Combat Designer of RYL Online and C9, is in charge of the action combat system for the title.

The new title releases will be unveiled along with game trailers on November 14th during the Pearl Abyss Connect 2019. It will be broadcast live on Twitch and YouTube for gamers around the world who have high expectations for the new Pearl Abyss games.

Pearl Abyss has promised that they will provide these titles for all gamers around the world in time with new and different gaming experiences, as they take in this new journey to challenge various genres and platforms. Don’t forget to follow Enduins for more gaming news and information.