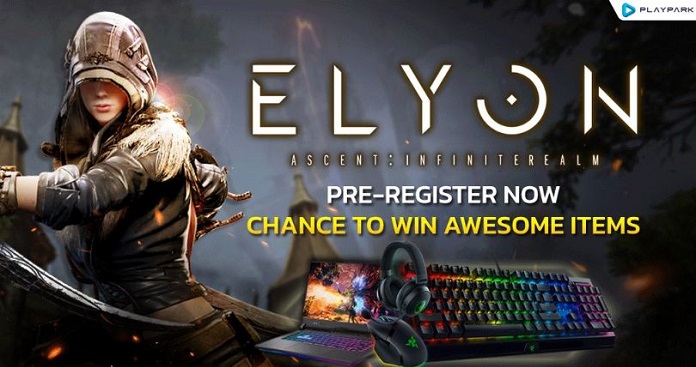 Elyon SEA from PlayPark gives players a world-class PC MMORPG experience with its vast open-world powered by immersive 3D graphics. Travel through the world and experience powerful classes with unlimited skill combinations, aggressive gameplay, and skill-sharpening combat mechanics that push the envelope of what an MMORPG should be.

Set in the land of Harth, Elyon SEA is about the Vulpin and Ontari, two dominating factions fighting for control over the territories. Combining immersive graphics, open-world exploration, and a customizable skill system for class abilities, Elyon SEA allows players to play and fight according to their playstyle. Augment your formidable powers with runestones and mana awakening to create a character that is 10% your own, ready for the immense challenges the game has to offer for players both new to MMORPGs or hardened veterans.

Elyon SEA has just opened its pre-registration here. Gamers have a chance to win an Asus ROG Strix G15 gaming laptop, a Razer Black Widow V3 gaming keyboard, a Razer Kraken V3 gaming headset, or a Razer Basilisk V3 gaming mouse by pre-registering! In-game item rewards will also be unlocked via milestone achievements depending on the number of pre-registrants. All unlocked milestone rewards will be sent to players during the official launch of Elyon SEA.

Elyon SEA is developed by Bluehole INC of South Korea, known for their games like PUBG and TERA. From the initial South Korean launch, Elyon SEA has garnered great acclaim and feedback from players, allowing the game to open Japanese and Global servers. PlayPark will publish Elyon SEA in Southeast Asia, specifically in Thailand, Singapore, Malaysia, Philippines, Indonesia, and Vietnam. The game supports 2 languages: English and Thai.

Elyon SEA allows you to explore the beautiful but dangerous land of Harth via land and air. Discover the power behind dimension portals and prove your strength in special dungeons that are ready for you and your friends to challenge. The skill system allows you to create your own style of fight, and customize your skills and combat strategies according to your enemy’s situation and attack patterns. Unlock the way and cross through the portal to the Heaven Realm filled with precious resources that are yours for the taking.

To get the latest news and updates for Elyon SEA, check out the official website and join the official Facebook and Discord communities.

“WOW: Wrath Of The Lich King Classic” Arrives On September 26