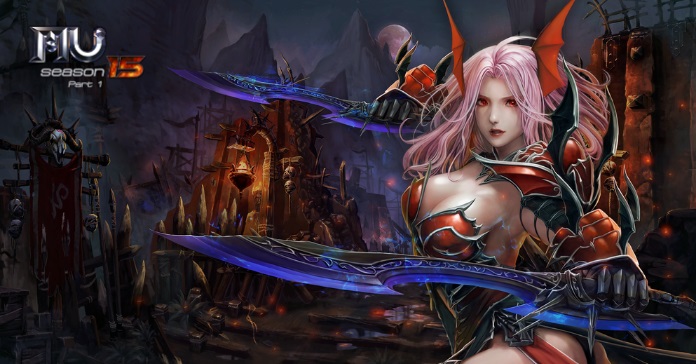 The Continent of MU is about to become bigger once again as PlayPark gets ready for the MU Online Season 15.1 update. Players will once again venture into the world of MU, with a brand new explorable map, new mastery weapons and armor to loot, and a new class to experience: the Slayer.

Strike with no shadow as the Slayer, the newest playable class that will go live in MU Season 15.1. Armed with a dagger-class weapon and with a focus on Strength and Dexterity, the Slayer is an agile melee-oriented class that can initiate the fight from a distance with her Bat Flock ability, quickly close the gap with Pierce Attack to deliver high burst damage, and retreats to safety.

A product of experimentation, the Slayer is the first successful demi-human: a half-human, half-bat killing machine. Kundun’s forces have been creating hybrids to increase the power of their forces, with the Slayer being the perfect assassin. Combining agility and her bat-like sonar, the Slayer was successful in her mission to quietly dispose of any who oppose Kundun.

Players can secure their Slayer through the pre-order promo which began on March 11, 2021. The exclusive Slayer pre-order packs come with the Slayer card, allowing access to the character, as well as Slayer Skill Orbs, Talismans of Ascension, and other items that will allow players to level their Slayer quickly. Check out the Slayer Pre-Order packs here.

MU Season 15.1 also opens the Scorched Canyon to players who wish to explore new lands for challenges and loot. The level cap has also been increased to 1200, to prepare players for the upcoming challenges ahead.

New to Season 15.1 as well are the 5th Mastery Weapons and 6th Mastery Armor sets. The Blue Eye weapons can now be further upgraded using the Blue Eye Anvil which can be purchased from the NPC James for 100,000 Ruuds.

To celebrate the new update, the PlayPark MU team has set up several in-game and community events for players. In addition to the Slayer Level Race, there will also be New Player and Loyal Player rewards packages and the continuation of Login Rewards.

The arrival of Season 15.1 also heralds PlayPark MU’s first anniversary! As MU celebrates its first birthday, players can expect month-long community events, raffles, and giveaways. For competitive players, prepare for a new season of Tower of Power, Heroes of the Throne, and the continuation of Arka War Blitz as these will pave the way for the ultimate guild showdown for MU Lords happening at PlayPark All Stars 2021, the grandest competitive stage for all PlayPark games. Expect Season 15.1 to go live on March 25, 2021, after the regular maintenance period. For more information, kindly refer to the official PlayPark MU website.