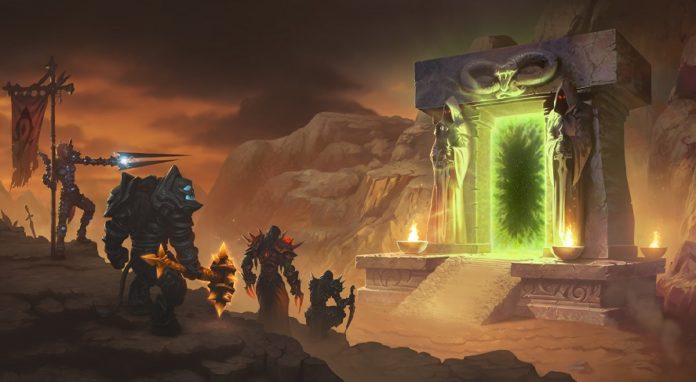 The Dark Portal has opened once again, and beyond it lies a timeless era of adventure. Beginning today, World of Warcraft players will rediscover the wondrous landscapes and mythic challenges awaiting them in the shattered realm of Outland as Burning Crusade Classic™, Blizzard Entertainment’s authentic recreation of the legendary first World of Warcraft® expansion, launches around the globe.

In Burning Crusade Classic, the heroes of the Horde and the Alliance set out on an excursion to the fel-scarred, alien world of Draenor, where the demonic Burning Legion is staging a war against all life on Azeroth. Together with their new Draenei and blood elf allies, Azeroth’s champions must find a way to stop the invasion at its source; seek out new allies amid the fungal forests and nether-wracked skies of a strange new world; and ultimately prepare to face the infernal forces of Illidan the Betrayer, the traitorous night elf demon hunter who has claimed the shattered domain of Outland as his own.

“Today’s launch of Burning Crusade Classic represents the first chance in over a decade for the WoW community to feel the collective thrill of stepping through the Dark Portal, of charging into an Arena together, and of taking down the final boss of Karazhan as a guild for the first time. These shared experiences are at the heart of World of Warcraft, and we look forward to seeing all of the new adventures players have with friends old and new as they return to Outland.”

●       The Shattered Realm of Outland: Traverse the treacherous crags and spires of Blade’s Edge Mountains, where even dragons fear to roam; hunt alongside the uncorrupted Mag’har orcs among the floating islands of Nagrand; battle demonic agents of the Legion in the shadow of the Black Temple; and much more.

●       Two New Playable Races: Fight for the Horde as the blood elves, seeking a new source of the arcane power that once sustained them, or join the Alliance as the Draenei, exiles from Outland in search of a new home.

●       Gather at the Arena Gates: Assemble your most trusted allies and prove your PvP prowess in 2v2, 3v3, or 5v5 combat in Arenas such as the Ring of Trials and the Circle of Blood (available starting June 16).

●       Take Wing on Flying Mounts: Take flight in the chaotic skies of Netherstorm and soar over fel-touched Shadowmoon Valley with the introduction of flying mounts in Outland.

●       Master Challenging Raids and Dungeons: Conquer 5-player dungeons set in the crystalline fortress of Tempest Keep and the Caverns of Time, where heroes bear witness to Azeroth’s past and take on epic 10- and 25-player raids.

●       New Options for Heroes: Carve gems of power to socket into players’ gear with the Jewelcrafting profession; choose between the Aldor or Scryer factions in Shattrath and earn their unique rewards; create a paladin on the Horde or a shaman on the Alliance; and more.

With today’s launch, players can now advance characters on Burning Crusade Classic realms to level 70 as they explore all of the new zones of Outland beyond the Dark Portal, and rally their allies to take on the raid challenges of 10-player Karazhan, 25-player Magtheridon’s Lair, and 25-player Gruul’s Lair. Starting June 16, players will be able to prove their PvP prowess with the start of Arena Season 1. Additional Burning Crusade Classic content will roll out in future content updates.

Following the start of Arena Season 1 in-game, top PvP teams will have the chance to go back to the roots of WoW esports in the Burning Crusade Classic Arena Tournament, taking place July 24–26. Full tournament details, including information on how to participate, will be announced in the weeks ahead.