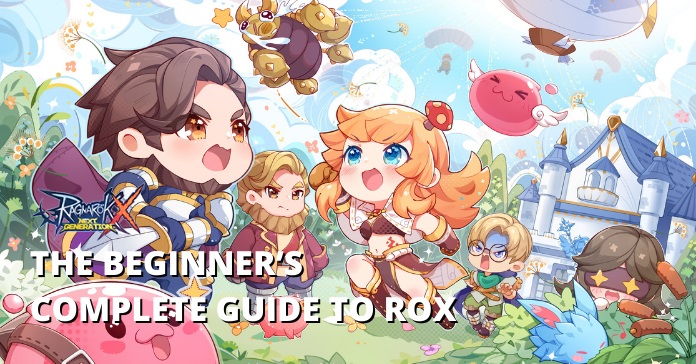 This guide will help you start your journey in Ragnarok X: Next Generation in the right direction by teaching you the basic functions you absolutely need to know plus tips and tricks to make your character leveling go well in the game.

WHAT ARE THE DIFFERENT AVAILABLE CLASSES IN THE GAME?

Swordsman – Swordsman is a single target team fighter class in the game. They can use the strongest armors in the game which helps them defend the peace of the continent. With their unparalleled defensive capabilities, they’re usually found in the front lines of battle serving as the vanguards of any party. Some of their skills include Bash, Magnum Break, Endure, and Provoke. Can advance into knight class.

Acolyte – their main roles are support and healer. They are strong against shadow and undead-type monsters. Acolytes are peace-loving but when push comes to shove, they use the holy light within them to smite their enemies. Some of their skills include Heal, Blessing, Holy Light, and Kyrie Eleison. Can advance into priest class.

Mage – they are the masters of the most profound arcane magic. Even nature must submit to these magical scholars. Their main role in the game is a ranged AOE magic damage dealer. Their skills include Fire Bolt, Soul Strike, FireWall, and Frost Diver. Can advance into wizard class.

Thief – these classes can launch multiple attacks in a blink of an eye. They use deadly weapons and crippling weapons as their main arsenal. Their role in the game is high output single target damager. Their skills include Brute Force, Ambush, Venom Knife, and Hiding. Can advance into Assassin class.

Archer – no enemy can escape their deadly eyes. They are masters of killing enemies from afar using a variety of ranged attacks while using traps to keep their enemies at bay. Their skills include Double Strafe, Arrow Shower, Arrow Repel, and Ankle Snare. Can advance to Hunter class.

Merchant – to a merchant the world revolves around Zennies. Not only are they good in combat, but they are also good at marketing, using their stalls to sell their different goods. Their skills include Midas Touch, Mammonite, Cart Revolution, and Crazy Uproar. Can advance into Blacksmith class.

EQUIPMENT SYSTEM AND HOW THIS AFFECT YOUR CURRENT BUILD

One of the things that made Ragnarok Online successful is the flexibility it gives the players on how they build their characters. There are many types of builds in the game you can experiment on. These are usually called “paths” in other games. In RO, these builds are sometimes a pre-requisite to another type of job class, but most of the time, they are used simply as what makes a player enjoy the game most or what suits their playstyle best, and it all starts with the type of equipment you are currently rocking.

Different builds in the game demand different types of equipment. Your best source for these is the various instances you can clear in the game, trying out your luck in the equipment gacha system, or purchasing specific equipment in the exchange/trade center. And finally, for any mobile MMORPG, the equipment has its own rank which starts with white-colored gear.

What separates ROX from other RO mobile games is the main storyline. Unlike its other iterations, ROX has a deep story with fully 3D animated cutscenes in between quests that will further engross you in the lore of the game and further introduce you to the different characters you’ll encounter during your adventures. [READ] Basic Tips And To-Dos For Faster Level Ups

Questing in the game is fairly simple thanks to the auto-path system. Simply tap on the quest you wish to do on the quest list located on the left side of your screen and your character will automatically go to the quest location.

WHAT IS ROX LIFE AND THE USE OF STAMINA?

ROX has no stamina system for grinding in the game which means you can AFK farm non-stop if you wish to. Instead, your stamina is used for a different feature called RO Life, which is the “Life System” equivalent of other games. In RO Life, you can spend your stamina on different activities like fishing, mining, gardening, smelting, cooking, and crafting. Participating in these activities will grab you various materials and ingredients to craft items essential for your adventuring. We recommend spending your stamina as much as you can they won’t go to waste.

WHAT IS ODIN’S BLESSING AND HOW TO USE IT?

Odin’s Blessing is one of the most crucial features in the game in terms of leveling faster and farming. It multiplies the Base EXP, Job EXP, and Zeny you acquire when defeating enemies by 5. So if let’s say you get 10 EXP from a kill, when the blessing is active, you get 50 instead. For a more in-depth guide on Odin’s Blessing check out the guide below:

Complete Guide -> How To Efficiently Use Odin’s Blessing

GUILD AND PARTY SYSTEM AND WHAT ARE THEIR ADVANTAGES

A Ragnarok game won’t be complete if there’s no guild and party system. Parties or teams are an essential feature for players who want to team up and clear different challenges in the game like dungeon raids and boss instances.

Guilds of course are one of the main features RO has perfected over the years. Joining a guild will open up a ton of new features for you to take advantage of, not to mention other players you can potentially become friends with.

Playing solo is always an option in RO, X but we encourage players to find a guild that suits them. It doesn’t have to be a hardcore try-hard guild or a whaling guild. Over the years, guilds have become flexible for other players with different circumstances like for those who are busy with their studies or have work, or maybe even just for casual players. Ask around the game and community if there are guilds that fit your current lifestyle.

THE CARNIVAL SYSTEM AND DAILY ACTIVITIES

The carnival system is where you can check out things you can do in the game as well as the various daily activities you can participate in. It goes without saying that these activities reward you with goodies. These activities have a daily limit.

MVPS AND MINIBOSSES, WHY YOU NEED TO HUNT THEM

There are world bosses in the game you can hunt down and get rewards from. They are called MVPs and Minis in the game. MVPs and Minis drop rare items but they are very tough to kill so forming a party before attempting to engage them is always recommended. They only appear at certain times in the day so always check the MVP and Mini list as to when they’ll spawn and prepare accordingly. If you defeat them, the rewards will be evenly split between your party members.

Let’s get this out of the way right now. There is no direct player-to-player trade in ROX. If you know how mobile game monetization works, you’d already be expecting this from the get-go. We do have the Exchange Center where you can auction out different items in the game and buy some from other players using the exchange currency called Crystals. Crystals can be used to buy items auctioned out by other players. They can also be converted into Diamonds, another currency in the game, which you can use to buy specific items such as rare equipment and so on.

The Glory Pass in ROX is the Battle Pass of the game. Glory Pass can be purchased using diamonds or top-ups (real money). Each new battle pass will contain new sets of limited items you can only get for that specific pass. The pass has a set of milestones you need to reach to get their rewards. These include limited costumes, headgear, mounts, avatar borders, customized chat heads, and many more.

Complete Guide -> Everything You Need To Know About The Glory Pass

IS RAGNAROK X NEXT GENERATION FREE TO PLAY FRIENDLY?

This is always the question that makes or breaks the interest of a player in a game. Ragnarok X: Next Generation is Free-To-Play friendly because almost all items in the game can be acquired through proper planning, grinding, being active daily, and finishing all daily activities. You can still achieve and experience everything the game offers as long as you’re vigilant and always active.

Ragnarok X: Next Generation also specially prepared three time-limited Southeast Asian-themed items for players to acquire, including an Plai Kaew Elephant mount, a Kinnaree Crown, and a Nusantara Mask, which are only available in SEA. Players can follow the details found within their version of the game to acquire these prizes. –> [MULTIPLE UPCOMING EVENTS WITH ENDLESS REWARDS]